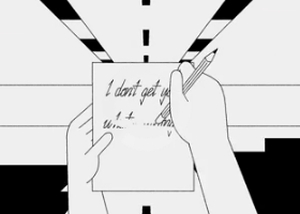 Inspired by Japanese graphic artists such as Yuichi Yokoyama and retro games X and 3D World Runner, this fully animated video, directed by Nicolas Ménard, is set in several surreal worlds where communication is lost and confused heart-break takes over. The 2-D animation moves through different backgrounds with the viewer experiencing the video from the point of view of the main character. Tackling themes of love, misunderstanding and the hope of a resolution after a breakup, we watch as our protagonist opens letter after letter, written in a language he cannot understand, to symbolise the chaotic communicative issues that follow a break-up.  What is the other person thinking? What are they trying to say?

Drawn frame by frame in traditional 2D animation, the film is complete with edgy, graphic characters that represent the artists. From parks and underwater scenes to art galleries, the simple illustrative journey gives beautiful, graphic results. Alternating the backgrounds to the tempo, Nicolas uses the gradual addition of colour to heighten the power of the chorus.

Nicolas Ménard, Director, Nexus, says “It’s been a real blast to direct Tourist’s Illuminate music video. Not only because it’s such a playful, awesome sounding track, but also because Will was keen to jump straight into the weird abstract universe I’d suggested. It’s also been really fun to play with the idea of translating a poem into Korean; a little metaphor for miscommunication in a relationship. I’m looking forward to seeing whether people dig out those cryptic messages..! Everything was animated frame by frame in Photoshop, with some slight compositing in After Effects, and the editing in Premiere”

Jake Robinson, Creative Director, says; "Will and I have worked closely together to create a visual world for his music. We reset Tourist’s ‘look’ in his previous single Wait by moving to simple black and white design and cinematography. With Illuminate we wanted to be bold, expressive and introduce colour into that world. We felt that Illuminate’s vibrant feel naturally lent itself to animation. I’ve been keen to work with Nicolas for a while. His work, whilst being visually striking, manages to covey a fragile human quality. Emotion is fundamental to all Tourists’ work and in particular Illuminate, underneath the brightness is a tender story of love and loss.”

Tourist, Artist, says; “Illuminate stems from feeling like you're in the dark in a relationship, it’s about the frustration you feel when you don’t know what you’ve done to upset someone. Olly and I thought that "to illuminate" was a nice visual metaphor about ending that frustration. When it came to visuals, my dream scenario was to animate something for the video, and we were incredibly fortunate to get to work with Nicolas. I implicitly trust his taste and was keen to let him go wherever he wanted with the video. I feel an inherent nervousness when I relinquish control creatively but his interpretation really resonated with me. I keep re-watching the video and seeing things I missed the first time around!”