The film represents a visualisation of an artificial intelligence (AI) dream 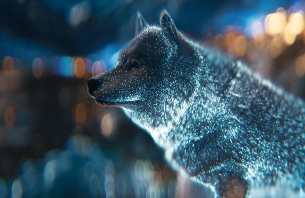 London-based Nexus Studios director GMUNK has produced a new film ‘Pure Imagination’ for Audi as part of BBH’s campaign to launch the new A5. The film represents a visualisation of an artificial intelligence (AI) dream, and its incredible potential for producing the perfect car. ‘Pure Imagination’ will be released in the UK on January 13th in cinemas and on TV.

The film is a thrilling, aesthetically stunning journey through a world where AI turns dreams into reality. The opening sequence is set in a ultramodern lab with a technician shutting down an AI bot for the night, but the camera zooms into the‘eye’ of the machine which starts to dream after being switched off. From here the viewer enters the brain/core of this high-tech computer, sparkling with pulsating data which GMUNK has represented visually with beams of light. The audience is then taken on an exhilarating ride of boundless AI imagination: flying through a futuristic city, before blurring into a mountain scenery with a wolf. The natural beauty of the wolf’s eye acts as inspiration for the AI bot, which transforms the image of the eye into the headlights of the car speeding through a tunnel.

Throughout the film the viewer is teased with dreamlike glimpses of the car embodied by light. The use of light to visually represent the data from AI imagination is eventually replaced with live action footage of the car to reflect the change from dreaming to conscious AI. In the final sequence the power of combining the best of man and machine is revealed when the Audi A5 exits the tunnel and enters reality in all its complete glory.

The bold streams of light create a visceral and cinematic experience which is complimented by the soulful lyrics of Gene Wilder’s ‘Pure Imagination’ from Charlie and the Chocolate Factory.

Known for his signature style of a hybrid of sci-fi themes and psychedelic visual palettes, GMUNK’s innate ability to combine the power of design and technology is strongly present throughout ‘Artificial Intelligence’. The film includes aspects of live action shot on location in Croatia and Slovenia to ground the narrative in humanity, but is mostly composed of CGI, with a particular emphasis on light,soft focus and anamorphic techniques to bring data to life. A variety of lensing techniques are used to create the cinematic mood, sense of movement and pace in the film.

GMUNK,the director of this film, says ‘The goal was to capture that essence of a psychedelic dream - but with the added dimension of data. The big challenge with this project was to create a dream world where data could be represented in an accessible format, so we had to create an aesthetic palette that people would find approachable. This is why light plays such an important role, as its vibrancy helps create an illuminated world that is exciting and can be understood by a mainstream audience. We wanted to deliver a visually beautiful film that presents an optimistic view of AI and its potential for a higher, evolving intelligence which aligns perfectly with Audi’s message.’