New York Showcase: The Best of The Big Apple

LBB’s favourites from the past six months 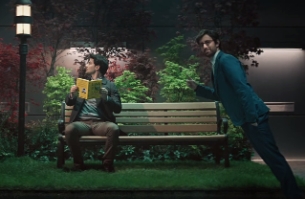 Picking our favourite recent work out of the New York ad industry was no small feat. The sheer amount of work that the city produces makes it a tricky list to curate. But here goes… our bumper Big Apple best from the past six months.

Wieden+Kennedy’s Southern Comfort ‘Whatever’s Comfortable’ ads are some of LBB’s favourite of recent times. But this week the agency has taken a whole different direction and launched ‘ShottaSoCo’, a series of mad, Taiwanese-style animation, brain-washing films.

The AICP imagined different CCOs 35 years from now, offering up one of the funniest Call for Entries campaigns we’ve seen in some time.

Under Armour - ‘Rule Yourself’

Big, bold, beautiful synchronisation makes up this Under Armour spot from Droga5, Oscar-winning director Wally Pfister and The Mill.

This powerful PSA from BBH New York highlights the startling amount of people in the U.S. that struggle to afford food.

Goodby Silverstein & Partners NY and Comcast asked Emily, a young blind girl, to describe what she sees when she watched Wizard of Oz. They then transformed her interpretation into this majestic film, along with a making of and a short documentary about her.

Man and woman sword-fight their through a beautiful mansion (and to near steamy nakedness) in this J. Walter Thompson film for Wilkinson Sword. We spoke to the team about how they made it.

Ogilvy New York transformed a series of Caterpillar machines into a marauding driving range in this nifty stunt.

For the launch of Samsung’s Galaxy S6, Big Spaceship crafted this music video completely out of 30 gifs.

General Electric - ‘Time Upon A Once’

These Lowe’s ads out of BBDO New York and directed by Joachim Back feature some pretty big stars. Just not as big as the product they advertise.

Thanks to firstborn, a custom-built specialised drone and an Oculus Rift headset, tequila geeks can now find out how Patrón is distilled up in the Mexican highlands of Jalisco. And all as if through the eyes of a bee. Neat. We actually spoke to the firstborn team about the project here. There’s also a 360-degree web experience.

A family in Sub-Saharan Africa loses a loved one to unsafe drinking water every 20 seconds - with nothing to remember them by. Deutsch teamed up with WATERisLIFE to give families their first ever family portraits.

When Mother New York went on the hunt for new interns, they launched this mentally meatilicious recruitment vid.

This cringe-fest of a faux ‘80s album commercial is courtesy of D5 Films’ Mike Long.

DDB New York and Chicago brought back The Coneheads for their commercial debut in this State Farm campaign.