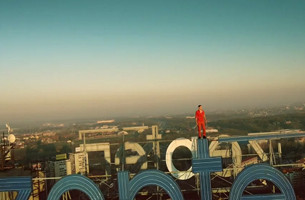 Back in June at the Cannes Lions, Saatchi & Saatchi premiered ‘25x25’, an experiment in film directed by 25 New Directors’ Showcase alumni, one from each of the past 25 years’ reels. Each director had to produce a one-minute film that included a prop relating to his/her original NDS film. So, for instance, Daniel Kleinman (who was the first director up) had to incorporate  a camel and Jonathan Glazer a light bulb.

The film preceded the 2015 NDS reel, taking up the pre-show spot that is usually filled by a tech-heavy, ‘world-first’ style show. Originally the 25x25 film was to be screened in Cannes and Cannes only but the nice folk over at Saatchi & Saatchi have decided to screen it once more. Which is a very good thing. (Trust us, we’ve seen it.) The screening is set to take place tomorrow (Tuesday 25 August) in New York at the Museum of Modern Art. In anticipation, we caught up with a few of the 25x25 directors to find out what they brought to this tantalising filmic experiment. We've also included their original NDS films for your perusal.

“A one minute surrealist piece, that I loved making and that no one else will understand for sure.”

“I approached the concept from the perspective of killing three birds with one stone - a) tell a compact story set in a situation with high stakes. b) shoot something out of my comfort zone and c) portray a highly exaggerated version of the perseverance that is required to make a film. Hence the WW2 setting, shooting on 16mm and the story of a doctor saving an officer at the cost of his own health and returning back to the battle.”

“As the film festival celebrates the development of new talent, I thought it appropriate to tell a story of  “becoming.” The emergence of identity. The materialization of self. I decided to visualize that narrative in a more experimental and representational style. It sets out to investigate an evolution from primordial abstraction to defined human form.  The props would serve as bookends that would be handled as color fields: ‘Yellow’ for a taxi and ‘Red’ for a paint bucket.”

“I brought a sequel to my film that was featured on the previous New Directors’ Showcase. A black and white monologue about one's self awareness and behaviour while being followed by a police car. Sounds boring? The previous one was about walking! The prop I had to use was a gun, but I didn't feel like I want to make my minute about violence, so giving it to a police officer seemed like a natural choice. I partnered with Daniel Koren once again. Daniel wrote the script from an inner dialogue he had with himself that felt like a pretty common thought yet held a meaningful twist.”

“Hopefully my film will surprise a few people. Especially my mother.”

“My idea was to make what would have been my showreel (had I had one) when I was a ten-year-old boy living in Newcastle. The idea came from the fact that when I was a kid I used to do impressions of my favourite actors into the bathroom mirror. The boy we cast (Baz) is WAY WAY WAY better than I ever was!”

“In truth, I wanted to do something different - for me - and also to show another style that agencies have not seen from me. I am very aware that I am mostly approached to do visually cinematic pieces with storytelling and post production; so creatives and producers don’t think of me as someone who is interested and/or can direct comedy dialogue. I wrote the piece trying to integrate the idea of the ‘prop’ - which was the theme for the event, into the film as seamlessly as possible. I hope it worked!”

“After some deliberation I felt I wanted to make something that linked to my showcase film. I used rushes from the cuttings of Mustang Wanted doing his thing and there is a voiceover which represents the voice in my head when I’m stuck in a rut for ideas. As it happens, free-climbing has a lot in common with the balancing act of being a new director.“