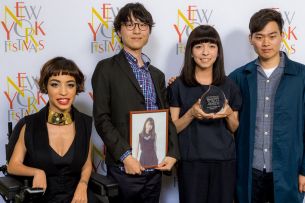 Team Artigatos won the 2016 Inclusive Design Challenge for their idea on how to develop a digital media showcase that presents inclusive design progress and success stories. The showcase will be used to introduce the Institute for Human Centered Design (IHCD) and the urgent case for practicing inclusive design in the 21st century to a wide range of global audiences at conferences, as part of presentations to global policy makers, and through strategic partnerships.  The team members will now work directly with IHCD to make their idea into a reality which will become a permanent fixture in IHCD’s showroom at their Boston, Massachusetts headquarters.

"I had such incredible time attending and presenting at the Torch Awards,” said Jillian Mercado. “I am all about diversifying the industry, so it’s a great feeling knowing I'm a part of change for the better of this world."

"What we do as creatives is highly subjective, competitive and most of the time, heart-breaking, because we put so much emotion into our work. But when we see young creatives succeed, it revives joy and hope in our industry and what we do collectively. I hope their journey will continue to be filled with more milestones like these because hardworking talents like them deserve to be celebrated."

The 2016 Grand-Winning Team was selected from five Finalist Teams from Japan, South Korea, The Philippines, and the United States. Finalists were chosen from entries submitted by teams of 18-27 year old creatives from around the globe. The Torch Award Finalists Team convened in New York City on May 18th at the Omni Berkshire Place Hotel and worked with their mentors to perfect their pitch for their Inclusive Design Challenge idea promoting the mission for nonprofit partner the Institute for Human Centered Design.

“Being selected as the 2016 Torch Award non-profit partner delivered an astonishing opportunity for our mission and message to be interpreted by young creatives from across the world.  Equally thrilling was the generous and focused engagement of some of the world’s leading advertising gurus as mentors to teams and members of the jury,” said Valerie Fletcher, Executive Director, Institute for Human Centered Design.  “We enthusiastically move forward with winning Team Arigatos to realize their Track-for-All strategy through exhibits in Boston and in Nagoya!”

The 2016 Torch Awards Jury determined the Grand-Winning Team based on the following criteria: relevance to and understanding of the Institute for Human Centered Design brand and mission; a clear demonstration of campaign goals and strategy; adherence to the brief, including scope and budgets; and creative idea.

In 2014, New York Festivals launched the Torch Awards to champion young creative talent. Now in its third year, the competition encourages creatives from the ages of 18-27 to take part in a unique competition that explores a creative challenge and offers mentor training on how to pitch their idea.