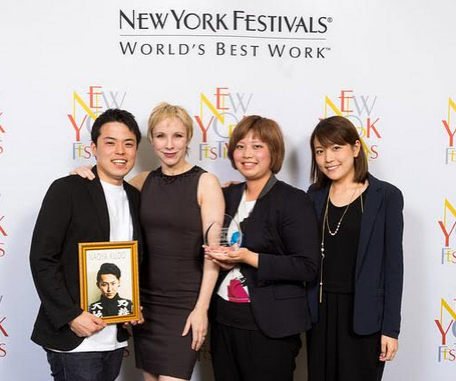 Rodger Beekman, executive creative director for BPG/Bates Dubai and 2015 New York Festivals Executive Jury member mentored the award-winning team. Beekman had this to say about the team’s pitch and campaign: “The Dentsu team won the Torch award because their concept was so pure and so in the heart of the essence of the brand, than it was hard for the jury not to let them win.”

Next to that they showed a high level of crafting skills, and how to translate the concept to other media platforms. For a team so young we were all very impressed by their level of thinking and their strategy. I am very proud to be their mentor.”

The 2015 Grand Winning Team, selected from five Finalist Teams from Canada, Japan, United Kingdom, the Philippines, and Vietnam, was chosen from entries submitted by teams of 18-25 year old creatives from around the globe. The Torch Award Team Finalists convened in New York City on May 20th at the Omni Berkshire Place Hotel and worked with their mentors to perfect their pitch for their campaigns created to promote the mission of The Project Solution.

In addition to judging this year’s Torch Awards, these prominent creative executives assembled in New York City for five days to judge the 2015 Shortlist across all mediums and choose the World’s Best Advertising.

The 2015 Torch Awards Jury determined the Grand-Winning Team based on the following criteria: relevance to and understanding of The Project Solution brand and mission; a clear demonstration of campaign goals and strategy; adherence to the brief, including scope and budgets; and creative ideas.

The Torch Awards, launched in 2014 to champion young creative talent, encourages creatives from the ages of 18-25 to take part in a unique competition that explores a creative challenge and offers mentor training on how to pitch their idea.