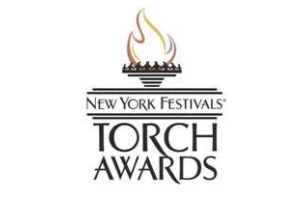 New York Festivals World’s Best Advertising invites young creative talent from the ages of 18-25 to take part in the second annual Torch Awards, a unique competition that explores a creative challenge each year and offers mentor training on how to pitch their idea. This year’s challenge is a 60-second video.

For the 2015 Torch Awards, New York Festivals has partnered with The Project Solution, an international nonprofit organization that collaborates with small, like-minded nonprofits around the world that require small grants to fund a critical infrastructure project in their region.

“New York Festivals partnered with The Project Solution because we are impressed by their international reach and commitment to community, as well as their ability to funnel 100% of the donations received directly into their projects,” said Alisun Armstrong, Executive Director, Torch Awards. “And with entries and judges coming from more than 70 countries every year, the New York Festivals family extends to the four corners of the world; these projects have a very real, meaningful impact on individuals, yet affect us all.”

Entrants in the 60-Second Spot Challenge will be presenting their creative concept for a one-minute video promoting The Project Solution’s “Subscription for Change” program, and competing for the chance to see their work go live. The video will communicate to people how they can make a real difference in the lives of others by creating a video to assist The Project Solution’s mission.

Five Finalist Teams will be invited to New York City to present their ideas. Before they head into the pitch, they’ll fine-tune their work during an intensive work session with their mentor—a member of the New York Festivals World’s Best Advertising Executive Jury. The teams will have 10 minutes to pitch their idea to an exclusive jury panel including members of The Project Solution team and members of the New York Festivals Executive Jury.

The Torch Awards was launched in 2014 to champion young creative talent. Young creatives are encouraged to enter and review a brief outlining a marketing opportunity to assist The Project Solution and a chance to see their campaign selected to go live.

There is no entry fee for the Torch Awards. Teams of two to four people 18-25 may enter.

The Project Solution, a nonprofit, was founded in 2009 and started with the simple idea of creating a community of donors to help a community in need. They collaborate with small, like-minded nonprofits around the world that require small grants to fund a critical infrastructure project in their region. Their philosophy is centered on the idea that small solutions can make a big impact. With a dedicated group of annual donors, their focus is on completing projects that offer long-term change.