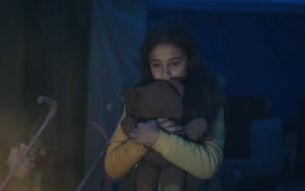 Collaborating on a special project, Saatchi & Saatchi London and Unicef UK have today released a new film to highlight the plight of children affected by the ongoing conflict in Syria as winter approaches.

The campaign film follows the journey of the character, Yana, a nine year-old girl living in a refugee camp who is looking for and collecting childhood objects, including clothes, boots and a teddy bear.

As the film unfolds, we see the girl take everything she has found and use it to build a fire. In a life where warmth is just as essential as human comfort, even her teddy bear ends up in the flames.

By the end, Yana is in the family’s tent - happy, safe and warm - being wrapped in a blanket provided by Unicef, the world’s leading children’s organisation.

After nearly six years of war, millions of Syrian children are facing another bitter winter in refugee camps or on perilous journeys in search of safety.

This film aims to raise awareness of the struggles that Syrian children are facing right now – the most prevalent in the coming months being the need for warmth -  as well as encouraging donations to Unicef UK.

Lily Caprani, Deputy Executive Director at Unicef UK  said, “Over eight million children have been affected by the conflict in Syria and are in terrible danger. So many have lost their school, their home, their friends, even their family, and they now face a bitter winter in dire conditions. We hope this film really brings home the plight of these children; not least the effect of plummeting temperatures as the winter kicks in. Yet we aim to leave our audiences with a message of hope that Unicef is helping to keep children safe.”

The 90 second film will run on YouTube and be shown at a number of events including the Hogmanay festival. 60, 30 and 20 second cut downs will be promoted across online channels including Facebook, Twitter and Instagram using the film’s hashtag #ItBeginsWithABlanket.

Presenting a simple yet effective solution for the humanitarian crisis affecting Syrian children, #ItBeginsWithABlanket plays on the concept that a blanket is only the beginning of the help that is needed but an important one.

Unicef is one of the few humanitarian organisations working to protect children in Syria and across the region providing blankets, clean water and medicine.