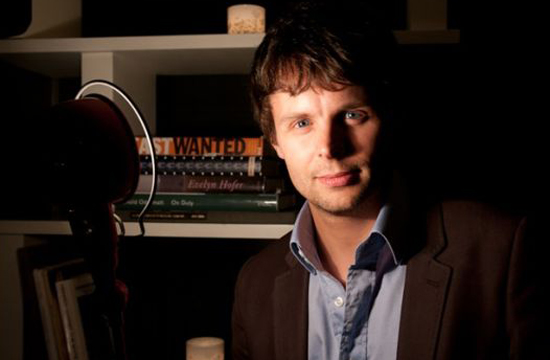 After a few years building his reel in the security of the Manchester ad circuit, director Phil Hawkins has relocated to London to launch his career with production house, Little Fish Films. Hawkins is an interesting prospect – he may be young but he’s got three micro-budget feature films under his belt. What’s more he’s managed to successfully launch his films through social media channels and has built up a fair reserve of digital savvy. We caught up with Phil to find out more.

LBB> How have you found it moving from the Manchester circuit to London?

PH> It’s been eye-opening. I see it as a real challenge. Before I moved down I wasn’t really in touch with London agencies, I’d done some odd bits but nothing much. It was a whole other world. I sent my work out to various production companies just to get a feeling of how my work would be received. The response was fantastic – which I was surprised by! I had lunch with Sophie at Little Fish and we just hit it off. It felt like we were on the same page and going in the same direction. I wanted to go to a place where I’d be part of a team rather than just sitting on books. I just want to get stuck in and be part of a company that’s growing.

LBB> Tell me about the short film Spark that you made with Little Fish.

PH> That was a great opportunity. When I joined them they said ‘we want to get to know you by making something together’ and they also wanted to have one piece that said a lot about my work rather than a two-minute reel full of lots of different things. I’ve been lucky so far in commercials to have done comedy, drama, all these different things but I didn’t have one particular piece that hammered home my skillset, my humour and my eye.  They said I could make anything I wanted but it had to tick the boxes and showcase all of my strengths. I wanted it to be narrative-based, to be quirky, to have adults in it; I wanted it to be cinematic and very heavily production-designed.

I was also working with a new team of people which was exciting. I’m immensely proud of it because it’s really a calling card that shows ‘this is what we can do’. I think it was a great opportunity and a great commitment for the company to spend their money on making a test film like that. We had Red Cam and it was a four-day shoot and a big crew – it wasn’t a case of let’s get a 5D and make a test film. They wanted to make it right. It was a great experience.

LBB> The path you’ve taken is quite interesting in that you’ve spent time in a small market like Manchester, honing your skills and developing your voice on work that hasn’t necessarily penetrated and now you’re moving to London with a reel that’s almost fully formed.

PH> I’ve got this one calling card film, but actually if someone asks ‘what else have you done’, I can say ‘well, how long have you got?’  I am an anomaly. I’m young but I’ve done all this stuff.

I guess when I’ve worked on less exciting briefs I’ve always tried to find something interesting within them that has allowed me to push them forward. I never want to be complacent; I want to deliver every time. It’s harder to make a slightly shoddy idea better than it is to get a really good idea and make it great. It’s interesting, it wasn’t particularly planned – I fell into commercials really. I worked as a runner, then moved up through the camera side of things and made some short films. I made a low budget commercial that won the Roses award. If you had asked me before I started commercials what I wanted to do, I would say ‘I want to make movies, I want to tell stories’. But the best narrative filmmakers come from commercials – it really refines your eye and the attention to detail is brilliant. Even though they feel like very different formats they go hand in hand in a strange way.

LBB> Well that’s something else that makes you unusual – often directors who enter commercials harbour the ambition to one day make a feature film, but actually you’ve got three low budget features under your belt already.

PH> It’s really exciting. The last film I made ‘Being Sold’ was shot in two days, which should be some sort of Guinness world record. It was obviously experimental, but in the same way that some people get their mates together to make a short film over the weekend, I wanted to raise the bar.

LBB> And you raised support for the film and distributed the film over social media – how did you find that?

PH> ‘Being Sold’ was an innovative project so I wanted to release it in an innovative way. We didn’t want to just sell it to a market. There’s all this talk at the moment about what alternative distribution actually is. Is releasing films online going to be a way of making money for producers and investors?

Basically we thought ‘we will put our money where our mouths are’ and we were the first people to release a feature film exclusively through a site called Distrify. It’s based up in Scotland and is a means of sharing films through social networks. We launched the film at the Edinburgh Film Festival and we launched it through a live webcast. The lessons we’ve learnt, I’ve passed on to other filmmakers and they’ve gone on to make decent returns on films they’ve made, even short films. They’ve been able to find a niche in a market and find an audience.

The thing about online distribution is that it’s not all about your opening weekend. People keep discovering it and passing it on. Where it comes from we don’t know, but it’s interesting, especially on Twitter. Our Twitter followers keep growing even though I’ve been busy doing other things and haven’t tweeted as much recently. People keep joining, discovering the film and buying it. It’s on iTunes now and it’s going to be on Netflix and other channels eventually. It’s been an interesting process.

LBB> How do you think this experience will help your career as a director?

PH> There are whole agencies devoted to this sort of thing, but if I can understand it, then it definitely helps. It’s about understanding your audience and knowing the platform.

PH> You’ve got to shoot a lot more so you’ve got options and you can plan for every eventuality. That can be quite different. It’s fundamentally the same really, but it’s about knowing where the work is going to end up. If you’re shooting something for a mobile phone you’re not going to shoot it on a big wide lens with everything looking very small in the frame.

LBB> What sort of projects would you like to work on in the future?

PH> I love anything that tells a story. I love the John Lewis commercials, for example, they’re fantastic and so well thought out. It would be a fantastic honour to do something like that.

On the flip side of that I really enjoy shooting cars. I’ve shot a lot and like that you can take off your narrative hat and put on your pop promo hat instead. I like the speed and I like the fact that car ads are imagery-based. People often say that in storytelling and filmmaking you have to ‘murder your babies’, and a lot of the great imagery ends up on the cutting room floor. Just because you like a shot it doesn’t mean that it moves the story along. Whereas with cars, it’s all about making it look as cool as possible. It’s very freeing.  Car commercials have toys. That’s exciting.

I think I just really want to work on ideas that are visually and creatively interesting. I love figuring stuff out. I like working on things that seem impossible, either because of budgets or just because they’re really hard to achieve. It’s so rewarding. It’s about collaborating; working together with everyone on the same page to make the best work that you possibly can.