Stockholm-based director on teaching himself animation as a kid, his street dance legend dad, and moving into more realist filmmaking 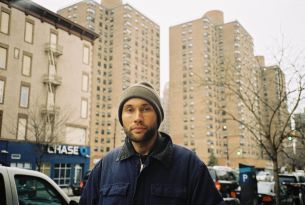 When he was a kid, people were worried that Maceo Frost wasn’t getting enough daylight. But his time spent inside wasn’t wasted - he was in his bedroom arduously learning how to animate. All that hard work eventually landed him a Swedish Grammy nomination and an inroad into filmmaking as a career. Son to a skateboarding mother and street dancing legend father, Stockholm-born Maceo is less known for animation these days, instead exploring a live action, more documentary style approach. Stuff “that gives you goosebumps” according to a peer of his.

LBB’s Addison Capper chatted with Maceo to talk playing the piano, his first feature length project, and his new podcast which he’s just launched with his dad.

MF> I grew up in the suburbs of Stockholm, Sweden in a melting pot of cultures. My neighbourhood smelled of curry, kebab, and Swedish meatballs. I was the kid everybody thought was a girl because I had such long, long hair and they picked on me quite a bit. I made a decision to never conform to the mold, be proud of myself and become great at something.

LBB> When did you first think to yourself that you wanted to be a director?

MF> When I was 12 I fell in love with filmmaking after realising that I was terrible at programming. So I went full on and made Lego stop-motion animations and then skate films with my friends.

LBB> Where did you hone your craft?

MF> I spent months in my room learning animation when other kids were out drinking and partying. People were worried that I didn’t get enough light. That hard work earned me a Swedish Grammy nomination for a project I started in high school. When I went to the awards it was the first time I’d met other filmmakers and slowly from that I was introduced to a world of film and advertising. I started out doing visual effects for other directors and eventually landed an internship as an in-house animator at BUCK studios NYC. But it wasn’t until I came back to Sweden after my time in New York that I decided to fully devote myself to live action and explore a documentary approach.

LBB> How would you describe your directorial style?

MF> A friend of mine summed it up quite well. He said, "you like things that feel epic and things that give goosebumps.” And that's basically what I always aim for in everything I do. It comes from me growing up listening to funk music with my dad and remembering how the breakbeat in the middle of the song comes on, giving everybody goosebumps. When you feel something deeply you usually make a serious face. I realised that that feeling can be translated to film. It's a sort of divine rhythm that you can apply to an edit which just gives a goosebumps feeling.

Other than that, I try to infuse my films with a human emotional depth that people can relate to. Always trying to get to the core of a person behind all the layers. Trying to capture the profound essence of life.

LBB> Your Nokia film, which you directed through Knucklehead, is absolutely gorgeous - what can you tell us about that film? What are your memories from the production?

MF> Thank you! Filming in Kibera in Kenya was an amazing experience and I had so much fun hanging out with the kids and their teacher Michael. One of my strongest memories was of one of the kids’ fathers who asked me, “foreigners come here all the time, take photos of us, make money and leave. And we remain here while nothing changes. Are you one of those people?"

Things like that make you think, here I am making a film commissioned by one of the world’s largest brands, how can I do right by him and all these amazing kids that we've spent the last few days filming? I told him I'd do my best to create something beautiful that would inspire people to help out in any way they can and that Nokia would donate to the charity. Our hearts were quickly broken though when we received news that half of the school had been demolished. Luckily there was still some space left where the ballet programme still lives on. It was a punch in the face for us working on this to try and make the best use of the privilege we've been given.

LBB> Which other projects that you’ve worked on are you most proud of and why?

MF> I’m proud of many things but recently I just finished a feature-length documentary about a woman called Namibia who is one of Cuba’s greatest boxers. She dreams of winning Olympic gold but she’s not allowed to compete because of a nationwide ban on female competitive boxing. It’s the first time I’ve done a project that's long format and it’s been an incredibly steep learning curve keeping the film interesting for 75 minutes. It’s been an incredible and emotional journey together with Namibia and we’re super excited to finally start working on a release plan together.

LBB> Who and what are your biggest inspirations?

MF> I love listening to music, it’s one of my biggest inspirations because when listening it sends a download of images to my mind. I often find myself writing treatments while listening from anything to complex jazz to Chicago footwork. I’m also deeply fascinated by Spike Jonze and how you can explore so many different mediums and styles for your work without ever boxing yourself into a corner. Whether it's making skate films, doing stupid stunts with Jackass or winning an Oscar for best original screenplay for “Her”. It inspires me to always push further and try out everything.

LBB> What do you like to get up to when you’re not filmmaking?

MF> I love surfing, it's my biggest passion other than filmmaking and gives me so much life energy. I also spend a lot of time learning to play the piano. I recently got a piano in my apartment so I play until the neighbours bang on the walls. I’m addicted to learning new things.

My latest hobby is recording my new podcast that I have together with my dad, the street dance legend Damon Frost. It's called ‘The Frost Transmission’ and it's basically about us putting the cards on the table about our childhoods, trying to figure out why we are the people we are today and what we've learned along the way. He grew up in an interesting time in America when the height of the civil rights movement was present in everyday life. In the podcast we talk about everything from the assassination of black leaders and how that influenced the people to the birth of hip-hop and how that revolutionised the youth and music industry. He has so many epic stories that I'm just happy to share it all with the world.