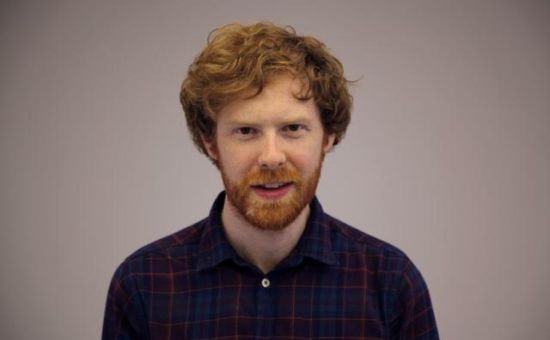 Luke Roulstone first appeared on the LBB radar when his mysteriously eerie promo for Polish rock band L.Stadt dropped. The super cinematic film, titled ‘Kathleen’, was shot on a shoestring budget and is a real beauty. But once we delved a little further into his reel, it quickly became clear that Luke is no one-trick pony. The young director, who is repped by Bare Films in the UK, already boasts a wickedly eclectic range of films, ranging from the mystery noted in ‘Kathleen’ to quirkier, humorous delights such as ‘The Adventures of Roger and Bob’ which he shot in his own house with a few mates. LBB’s Addison Capper caught up with Luke to talk DIY 007, just-do-it mentalities and historical influences.

LBB> Where did you grow up and what kind of kid were you? I heard a rumour that you once wrote to the Queen…

LR> I grew up in the countryside – in a small village near Stamford, Lincolnshire, but I was born in Scotland. I lived there ‘til I was six and have pretty rosy memories of that time. We lived in North Queensferry right by the Forth Rail Bridge. It’s a pretty inspiring piece of architecture, particularly at that age – to draw your curtains in the morning and be confronted by that sight, it’s a great first view of the world.

I’d spend many of my weekends growing up attempting to make colonies of ramshackle buildings in the woods with my brother – so the typical, safe, running jumping climbing trees kinda childhood. I feel pretty lucky in that sense. I did write to the Queen once, that’s true. She wrote back too. I was seven, I needed money for a Game Boy and she was the richest person I knew.

LBB> When did you realise you wanted to be a director?

LR> I’d always loved movies but the idea of being a director, and the possibility of me doing that as a job, probably only fully occurred to me when I was about 14. I made an awful lot of home movies around that time – mostly our own mini versions of either Indiana Jones or James Bond movies. I made a Bond film once called ‘Every man for himself’. It had a theme tune and everything.

LBB> How did you hone your craft?

LR> I wouldn’t say I’ve honed it yet. You’re always honing. Nothing’s ever perfect but then it’s often all those imperfections that can give stuff life, and that’s invariably what you’re trying to capture. I think. I’m just looking for stuff that speaks to me. I watch a lot of films and try to learn from that, using different projects to try different techniques, different ways of finding the life. I just shot something for Red Bull and we got to do a lot of fun camerawork with that.

LBB> We were big fans of your Kathleen promo. It’s pretty eerie stuff! What inspired the narrative and the film’s mysterious edge?

LR> Glad you liked it. I think the song always inspires a lot of the actual narrative. In this case I had a lot of ideas milling around in my head that I wanted to try out. I was dying to make something mysterious, something haunting and beautiful that didn’t feel like it was a part of any particular time or place. Figures, silhouettes, lonely characters – stuff so inherently cinematic it’s hard to resist. We found a song to match that mood, approached the band with an idea and they went for it.

LBB> I love the landscape shots at the beginning – where were they shot? And how was the production in general?

LR> The landscape stuff at the start was all shot in Dungeness. It’s a popular place to shoot films of this kind and it’s obvious why. There’s a great atmosphere down there that you just can’t fail to capture. You just turn the camera on and the beauty is there. Beyond that I had a really skilled DOP – Malte Rosenfeld. He always has great ideas of where to put the camera and works magic with filters. The otherworldly look is really to his credit. We had a tiny crew but a lot of the time that just means you’re more mobile – although it’s not without its problems of course.

LBB> You were also the editor on that job. Is editing a role that you enjoy? How do you find editing your own job? Do you prefer the creative control or is it more frustrating?

LR> I edit a lot of my own work – at first it was more out of necessity. Sometimes I enjoy it, but it definitely also drives me nuts. I’m always nervous when I first approach the rushes and swear next time I’ll have someone else edit, but I always seem to end up back at the computer chopping away somehow. Having said that, I approach a lot of shoots right now knowing how I want something to cut together. I don’t shoot loads of coverage and prefer to shoot for the edit, so more often than not it’s largely a case of picking the best takes and stitching them together.

The Adventures of Roger & Bob from Luke Roulstone on Vimeo.

LBB> The Adventures of Roger and Bob is a bit bonkers, in a good way. How did that project come about?

LR> I asked a friend of mine to write something pacey and free-flowing, like a stream of consciousness type of thing. Something we could use as a voiceover and just build images around. Really I just wanted to make a film that was fast and that we could shoot fast. He came back with Roger and Bob and that was that. We shot it in my house with mates over a weekend. It feels personal for that reason and there’s a lot to be said for just making something. I’m fond of it, I think it has a lot of energy.

LR> I guess I’m proud of everything I’ve made in some way. Whether or not they’ve turned out how I wanted them to I’ve always learnt something new from each experience. I quite like the film I made for We Are FSTVL. We had no money but used the low budget to help the creative. VHS is so beautifully ugly and has such a lovely texture – you don’t see it used properly any more. I mean it’s obvious why but I like to remind myself of how things were made in the past. It’s fun. I think in general I much prefer looking back than forward. Nostalgia’s a big feeling that I’m always trying to latch onto and depict.

We Are FSTVL Care Home from Luke Roulstone on Vimeo.

LBB> What would you say are your biggest influencers?

LR> Gosh, I mean my main influences come from movies. I love old cinema. There’s such a great discipline to how they made films before this digital age and I always try to approach things classically. Not that there’s not a discipline now but there’s something so romantic about old movies that I’d love to replicate. All the usual directors – Kubrick, Hal Ashby, Coen brothers, Paul Thomas Anderson – I could list directors and movies for weeks that I’m influenced by.

LR> What sort of projects would you like to work on in the future?

LR> Anything that is cinematic. I like shooting in any format – music videos, commercials, short films. It’s no secret I’d love to make a feature, if possible shot on film – the beauty of celluloid really has a big effect on me. I love comedy but I equally love stuff with a darker edge – I mean scarier, more mysterious. I’m not so hot on stuff that’s hard hitting or depressing. Ultimately films are a creative release for me so I always want them to feel escapist and fun in some way. I’m here to entertain.

LBB> Outside of filmmaking, what do you get up to keep yourself inspired?

LR> Music always plays a big part in giving me ideas. Photography. I’d love to travel more. I don’t know, the usual stuff. I watch plenty of YouTube videos. I live in a great flat full of old furniture, as horrible as that might sound, but anything with life and character is good by me. People on the tube. People in the park, in the pub. There’s life going on everywhere you turn and there’s nothing more inspiring than that.