Finish colourist on a photographic childhood, Madagascar and outdoor inspiration 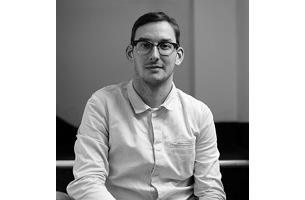 As a kid, Julien Biard steered clear of the troubles in his rough French neighbourhood by whiling away hours developing photo negatives with his mum. Perhaps it’s not so surprising then that he now finds himself at London post production house, Finish, as a colourist. His journey there, though, wasn’t quite as straightforward as it seems. After falling out of love with his dream of being a footballer, Julien took up textiles which eventually led him to a three-week work placement in Madagascar… he stayed for four years. He moved to London where he was sacked from a few French restaurants before landing a running spot at the post house Blue/VTR. LBB’s Addison Capper caught up this infectiously invigorating colourist to find out what makes him tick these days.

JB> I grew up near Lyon, on a pretty infamous council estate. It was a little bit like the film ‘La Haine’ by Mathieu Kasovitz but in colour. My grandparents lived about two hours away in a little town at the foot of the Alps so I was very lucky as it meant I could go to see them a lot. It was an escape from the concrete tower blocks and the nasty things that were happening in the estates back in the 90s.

As a kid I was pretty quiet and well behaved considering the circumstances. My older brother looked after me most of the time as my mother was working part time as a cleaner and part time in a photography shop, where I spent long hours waiting for my Mum to finish work after school. She used to show me the process of developing negatives. I have a vivid memory of looking at this white sheet turning onto an image while shaking it in a chemical substance (health and safety having a six-seven year old playing with chemicals Mum? Really?). I thought my Mum was some sort of magician! This was my first contact with photography.

LBB> Did any other of your childhood traits suggest that you might go on to work with colour and art?

JB> As a kid I always wanted to become a professional football player. I joined a football academy at quite a young age until my teens and football was the only thing in my mind, literally nothing else. But around the age of 16 it started to get really serious. Most of my friends were being scouted by clubs, it became much more competitive as a whole and in-between all of us, the fun wasn't quite there anymore and I slowly became interested in other things. I went to university back in Lyon and became a textile engineer specialising in colour sciences. I didn't really know what to do at the time and I have to say this was a very random choice but the subject took me by surprise and I really got into it. I think anything not to do with football would have amazed me anyway.

LBB> How did you actually become a colourist and when did you know it was what you wanted to do?

JB> After graduating I went to visit a family friend who was a businessman living in Madagascar and working in the textile industry. I was supposed to go for three weeks just to visit and have a break but I stayed for four years. He introduced me to his network and I got a job as a junior engineer, working in a lab ‘making colours’.

I eventually realised that this job wasn't really for me anymore. I needed something else, something more exciting. The main challenge that had kept me over there was to learn the language in Madagascar and understand and live in a culture radically different from mine. But when this was done I kind of wanted to learn other languages… the fact that I did not speak English made me very frustrated as everybody around me could.

I had a friend in London who was a film director and he convinced me to come to London. I didn't think twice and got the first flight back to Europe. When I arrived in London I was very excited! But it went a bit wrong to start with. My English was very poor and I got sacked twice after two days working in French restaurants… I'm now quite proud of that! I think my friend felt bad for me and passed on my CV to a post production house in Soho and I got an interview and eventually a job as a runner. On my second day I brought an Earl Grey Tea with a slice of lemon to a grading suite, and when I looked at his display monitors I remember saying to myself, “I know all this stuff!". Chroma wheels, colour values, hue, contrast.  So I sat with the Colourist all day and started to get involved. (I almost got the sack again for having gone missing all day…) But I knew this is what I wanted to do after five minutes.

LBB> Where did you actually learn the craft?

JB> The post house I learned my craft in was called Blue/VTR, where after being runner I became a Tape Op working in the machine room and later a Telecine Assistant.

We mostly worked on long form for TV and I was assisting the main colourist. He showed and taught me everything he knew. We are still friends now and see each other for a beer sometimes. I then joined MPC to work in commercials and that’s where I met Paul Harrison (now Head of Telecine at Finish). We became very good friends and he showed me a different side of colour grading. He also has played a big part in my progression as a colourist and I still work with him now at Finish.

LBB> At LBB, we’re all a bit entranced by the work of colourists. It always seems like such a beautiful and fascinating part of the production process. What would you say to that?

JB> It is always nice when what you do is appreciated and recognised by others. I think because colour can evoke different emotions, when the colourist gets it right it's a feeling in the gut – a je ne sais quoi! For me editing, sound design and mixing are equally important and it’s the combination of all these elements that makes great ads or films.

JB> I usually ‘play’ with a few shots to see what the options and limitations are and where I can take the image. I look at the composition, the framing and what the DOP and director had had in mind when they shot the spot. Everybody can grade an image and make it look cool but if one shot sticks out and that great look you had can't be achieved then it doesn't matter how good the rest looks, the overall grade will be shit. I often try to keep things simple and go with the flow. To me grading is very much a feeling thing where the DOP, the director and I work together to achieve something cool as a team.

LBB> Which projects that you’ve worked on recently have proved particularly challenging and enjoyable? Why?

JB> Working on promos and ads with Oliver Hadlee Pearch (Colonel Blimp) is always great. He's a real character and working with him is equally challenging and enjoyable. I’ve also recently worked with David Wilson on an ad for Beagle Street and the latest Royal Blood promo. That project involved using our remote grading system as David was in LA and I was here in London, which was very exciting!

LBB> How do you keep your eyes and ideas fresh as a colourist?

JB> I am very much an outdoor person. I spend most of my days in a dark room so as soon as I have a minute, I'm out.

I like fishing, shooting and anything to do with mountains. I like observing things, so every time I'm out I take snapshots and store them somewhere in my head. I look at lights, skies, nuances… and very often ask myself,  "how would I replicate this if I was in my grading suite?  My mates would probably take the mick out of me and call me all sorts of rude things if they were to read this, but I truly love my job and to me it’s just normal to try to find references and imagery that I could inspire my grades from.

I also have a lot, a lot of books at home… and although I know them all by heart, I'm always amazed by them.

JB> There is a lot I could write about the creative people and artists I love... I like the pre-Raphaelite period a lot, I am still amazed by Matisse (and not only for patriotic reasons), I love photographers like Fred Herzog, Andreas Gursky, Stephen Shore, Joel Sternfeld; the list is long. But the most creative heroes for me would be amazing war photographers like Robert Capa, Lynsey Addario, Jim Nachtwey. They would risk their lives and capture stunning images in unbelievable conditions. But I discovered all these amazing people later in life – my childhood heroes were not so ‘creative’. They were all famous mountaineers like George Mallory who was the first person to attempt Everest in 1924, German climbers Tony Kurtz and Andreas Hinterstoisser, who opened major routes in the Alps in the 1930s and met their tragic outcome on the north face of the Eiger in 1936. And also more recently Pemba Gyalje (Sherpa) for his amazing story, saving numerous lives during the tragic events on K2 Mountain in summer 2008.

JB> Red and white, with a cannon in the middle.

JB> Lots of exciting things! I’m hoping to work on some great and fun projects. The beginning of the year has been busy already so I hope the rest will be even more so!