Writer and Designer at 72andSunny 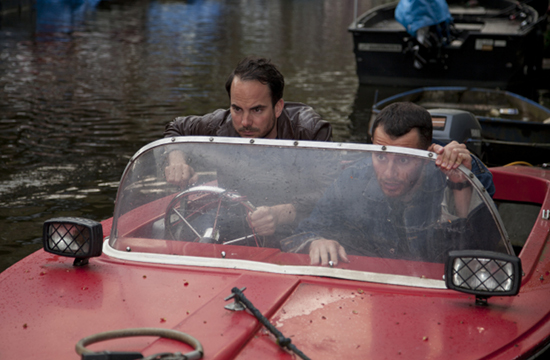 After meeting while studying Interactive Art Direction at Hyper Island Stockholm, Brazilian Jorge Brandao and Swiss Patric Franz joined 72andSunny Amsterdam as interns. But before they knew it they were ping-ponging between the Dutch capital and Los Angeles, working on the epic Call Of Duty: Black Ops II trailer ‘Surprise’, eventually finding themselves on set with a host of celebrities.​ Addison Capper spoke to the duo to talk growing up, life at 72andSunny and the importance of an ‘anything’s possible’ mindset.

LBB> Where did the two of you grow up and what kind of children were you?

JB> In Rio de Janeiro, running around with my two brothers in a house surrounded by rain forest. My biggest adventure as a kid was to rappel with an old rotten rope down our neighbors’ wall. I wanted to be either a crazy scientist or an inventor when I grew up, but during high school I came to realize that science wasn’t really an option.

PF> I grew up in a small town outside of Switzerland’s capital, Berne, surrounded by mountains, a lot of green and tons of other kids. I think I spent most of my childhood outside playing hide and seek. I was a curious kid, always up for an adventure or some bullshit—I still have quite a few scars left from that time.

LBB> You met as interns at 72andSunny Amsterdam - why do you think you both clicked and formed such a strong partnership?

JB&PF> We actually met before 72andSunny, while we were studying Interactive Art Direction at Hyper Island Stockholm. There, we were equipped with the tools we needed to build a strong partnership. For example, we feel very comfortable giving each other feedback - a crucial part of teamwork. During our time at Hyper Island we also became adept at building on each other’s ideas, which is something we keep perfecting with the larger team at 72.

LBB> How does the partnership function? Do you both muck in with all tasks?

JB&PF> We both left Hyper Island with a mindset that helped us forget the classic art director/writer way of working. We would both get bored quickly if we were limited to one area. Sometimes the designer writes and the writer designs. Other times we both focus on the user experience. At the end of the day, we just want a “groundbreaking-never-before-seen-on-the-face-of-the-earth” project. If technology can help us achieve that, we get even more excited.

LBB> Early on at 72, you got the opportunity to work on developing the global platform for Call of Duty: Black Ops II. You ended up flying out to Los Angeles to work with the rest of the team and a sea of famous actors. What emotions were you both feeling during that time and what was the experience like as a whole?

JB&PF> We were feeling a lot of different emotions. The entire project was pretty challenging, we were a bit insecure, we had just started and weren’t familiar with the 72andSunny way of working – we made it through some pretty awkward presentations in the beginning.

It was especially exciting because – even though we were just starting out – we were given the opportunity to work on this great brief with everyone else. We worked closely with the CDs in both offices, and helped develop a script that everyone responded to. At that point we began a seemingly never-ending game of ping-pong between the offices (LA and Amsterdam), which kept making the work better and better.

Before we realized it we were on a plane, heading to be a part of the shoot in LA. It’s really beautiful seeing an idea you helped to shape come to life. There was always so much happening on the set – the whole experience was just surreal. We were completely overwhelmed by the size of the crew, the impressive food vans and green screens.

LBB> What lessons did you take away from working on such a massive and successful project?

JB&PF> Don’t let a brief intimidate you. No matter the scale, urgency or importance, you’ll only get a good result if you have fun during the process. It’s an ‘everything is possible’ mindset. It may sound super cheesy but it’s true.

So many talented people work on each brief, and many creatives have a lot more experience. There’s no way around it, so you have to make it work in your favor, not against you. If anything, the pressure is on them!

LBB> What other pieces of work that you've worked on recently have really resonated with you?

JB&PF> Since we were hired a year ago, we’ve been busiest working on global pitches. We spend a lot of our time looking for that big idea, grabbing it, and executing across all kinds of media—even before we know if it’s all going to happen or not. It’s been different from the Call of Duty project, but still a lot of fun.

LBB> What do you both enjoy doing outside of work?

JB> When the weather is nice, I like to bike around the city and nap in the park. When it’s not (which happens quite often in Amsterdam), I watch a lot of films and score unreal goals on FIFA.

PF> Outside of work it’s all about gathering new ideas or just relaxing. Amsterdam is a beautiful city and there’s a lot to do, from visiting world-class museums to world-class bars. I never get bored.

LBB> Where do you see yourselves in 10 years?

JB> Working from a house in the middle of the Brazilian jungle. I’d jump from a waterfall to start the day, have breakfast with all sorts of fresh fruit, and then brainstorm with people across the ocean (or on another planet).

PF> At a pool party with the cast of the COD spot, laughing about the good old days back in LA.

Stay Protected from the Elements in Outdoor Brand Woolrich's Spot

LikeMeat Flips Cliches and Welcomes Everyone to the BBQ Season

As Euro 2020’s Footballing Nations Fall, This Art Project Is Marking the Occasion
View all News

Protect the Things You Love
View all Work