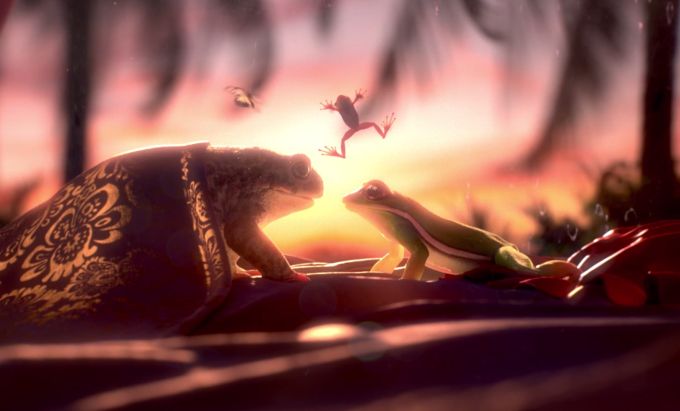 Florian Babikian, Gabriel Grapperon, Lucas Navarro, Théophile Dufresne and Victor Caire are the latest animation whiz kids to sign to QUAD Group’s WIZZ. Having met while studying at MOPA in France, the quintuple’s graduation film ‘Garden Party’ was the winner of Best Young Production at the 2016 Animago Awards. With a knack for injecting oodles of personality into even the most unlikely critters, Illogic are a talented group of young directors you’ll want to keep an eye on.

LBB's Liam Smith chatted with the team to find out more about how they formed and their brilliantly grim graduation film...

LBB> Let's get to know you. Who are the team behind Illogic? How did you meet?

Illogic> We met in the early days of our studies at MOPA animation school in Arles, France. We had a lot in common and we quickly became good friends. We’ve not stopped working together since, in both our school and personal projects. In the last year of our studies, we had the chance to keep the team together for our graduation film. It was an amazing year and it confirmed our desire to continue the adventure. We're actually five directors – Florian Babikian, Gabriel Grapperon, Lucas Navarro, Théophile Dufresne and Victor Caire. We all like to have a hand in the overall project, so the idea of directing and crafting the images at the same time works really well for us.

LBB> A lot of your work features animals. Looking at your reel we've got snails, fish, frogs, tortoises... would it be fair to say creatures are your forte?

Illogic> We're all passionate about the animal world. It always offers up an interesting point of view. Especially little animals. We like to play with scale, so toads and snails fit quite well on camera. It always gives you an opportunity to create captivating images that you wouldn't usually be able to see with your own eyes.

LBB> I also like how much character you manage to give these creatures. What's the trick to giving them so much personality?

Illogic> Animals are naturally very expressive in their own way. It's all about taking that and using the animation to reveal their character. Sometimes it's when you make them do something which they couldn't possibly do in real life. But most of the time, it's just the way you shoot them. When they're the centre of attention, they really matter to the audience. That gives them much more depth.

LBB> Your graduation film, Garden Party, is superb. I love the mischievous frogs and the unexpectedly morbid ending. Can you tell us a little about the film?

Illogic> The film is about changing the audience’s perspective. We place the camera in the universe of frogs, and let them drive the story through their adventures. Behind those insignificant little stories, something deeper and concerning is revealed. The film is all about striking the balance between two different atmospheres. In a way, those little frogs, only caring about simple things, bring a humorous touch to a kind of dark situation.

We tried to inject a bit of Hitchcock into the film, through the ambience and the suspense. Something really cinematic, blended with a very documentary aesthetic. It brought a very special atmosphere to the movie that we really liked.

The film had to be realistic, for both animation and rendering. We took great inspiration from just watching animal documentaries and studying real life. We got to a point where we even set up vivariums in our house during the production, with real frogs and toads inside.

Adding these small characters allowed us to bring in a new point of view and a touch of black humor, which is something we really enjoy. We don't like the idea of being too serious and always try to have some balance in the story.

LBB> You recently signed to WIZZ. What drew you to the company?

Illogic> After the film released, we were still unsure about our future. We knew we wanted to keep the energy we had together, and WIZZ was the one company that offered us this opportunity. They have good experience working with collectives, and they were really excited to collaborate with us.

LBB> What other pieces of work are you proud of and why?

Illogic> Our career is still in its early days, but because we have always been in this awesome team, we've taken pleasure in every project we've worked on! We've had a lot of fun. We hope to have much more to show you in the future!

Illogic> Because we're often making films about animals, real life is our first inspiration. We also have a common taste for black humor, the kind you’ll find in the Coen Brothers and Tarantino movies. All those mélanges of violence and irony. We also like the kind of visual comedy you can find in Blake Edwards’ movies. ‘The Party’ was a real inspiration for our film, especially at the end when everything turns very colourful and joyful.

LBB> And finally, what do you get up to when you're not working?

Illogic> For now, our job is pushing us to spend many hours behind a computer, which can be mentally draining. So we often try to practice sports, have fun in Paris, and travel when we can to find a balance. We also like to spend time together outside of work, as we're all very good friends. Talking about life, joking... it's a bit like a family. It's so cool to have this brotherly spirit when you land in the professional world.