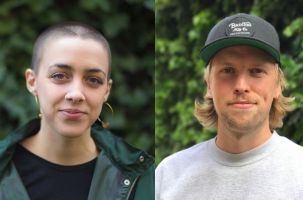 Georgi Gregori and Jorgen Sibbern are two creatives at 72andSunny’s Amsterdam office. Their most recent work is AXE’s search-driven campaign about the pressures guys feel in 2017, titled #isitokforguys. The launch film is a poignant spot that revealed the types of questions that guys are asking online, but aren’t comfortable enough to do so in real life (you can read more about it here).

LBB’s Liam Smith caught up with the duo to find out how they got into advertising and what inspires them and their work.

LBB> Tell us a bit about yourselves – where did you grow up, and how did you get into advertising?

Jorgen> I come from the woods of Norway, basically. A little place called Elverum, with three roundabouts and a decent handball team. I moved to Oxford, UK for high school before finance studies at the University of Miami - not very mindful of the fact that I’m terrible at math. I therefore signed up for the Norwegian Army halfway through sophomore year - and loved it. Gung-ho. And for some reason, that’s where I found a creative sweet spot. So I took a job as a prison guard in Oslo, and applied to Hyper Island in Sweden. Hyper was brilliant, which led to an internship at Anomaly Amsterdam - and then to becoming a creative and writer at 72andSunny LA, and ultimately 72andSunny Amsterdam.

Georgi> I grew up in Minneapolis, MN and always wanted to be an artist - that's all I knew. I graduated college with a BA in fine arts after which I moved back to Minneapolis and worked as a baker - which I loved, but knew it wasn't what I wanted to do forever. I ended up meeting with creatives at big and small advertising and design agencies in Minneapolis and sort of learned what an art director was through those conversations. I enrolled in Miami Ad School soon after and graduated in NYC where I then started my career at Spork before my move to Amsterdam.

LBB> You two worked on the recent #isitokforguys work for Axe. Can you tell us a little bit about the campaign?

Jorgen & Georgi> Last year, 72andSunny Amsterdam and AXE worked together to reposition the brand and move away from the ‘Axe Effect’, from implying that the magic being in the deodorant, to it being in you. But embracing your true self is easier said than done, with all the invisible labels and limits that guys have to cope with. So for the new social mission, we wanted to both shine a light on those limits, and help guys overcome them. To do something sincere and non-bullshitty with real guys as the centrepiece.

Seeing as guys rarely ask other guys about their insecurities, we went to the one place where they do ask their questions: Google. And after looking at the results, we realised that one question appeared again and again: ‘is it ok for guys…’ As we typed in different letters at the tail end of the sentence, more and more search queries appeared. Is it ok for guys to cry? … to be a virgin? … to drink soy milk? … to be the little spoon?. There was a huge range of topics. From hard-hitting and emotional questions, to funny and trivial ones. And that became the base. Together with the team, we decided to reveal the questions with an anthem film, as well as to provide guys with actual answers. The answers were created by real guys and celebrities - like fresh new heavyweight champ Anthony Joshua, actor Will Poulter and the godfather of grime himself: Wiley. Those video responses now appear on Google when the questions are searched, inspiring guys to be whoever they want.

LBB> Did you experience any memorable moments/shocking revelations during the creation of the campaign?

Jorgen> The queries themselves, probably. I mean, we didn’t really know how to react. When we realised guys were asking if it’s ok to say ‘I miss you’, to use emojis, to be a nurse, or to cry, for example, it’s all pretty scary, hilarious and tragic at the same time. Our data researchers looked at all the US and UK queries, including all the different sentence variations. The findings were pretty messed up. And some pretty NSFW.

LBB> Georgi, I hear you're working on a collection of embroideries that champions badass women past and present. I'd love to hear more about that!

Georgi> I am a little obsessed with craft, which to me means a lot of needle and thread as well as other time-consuming mediums (like perler beads). I started this series originally to make gifts for the badass women in my life, and liked the concept of using a historically feminine material and process to depict the women we should see more of, be them our grandmothers or idols.

LBB> And Jorgen, you've got quite the colourful background! Norwegian Army Corporal, business student, high-security prison guard... do you think these experiences aid you in the creative process?

Jorgen> Yeah, or at least, I guess it all comes from a need to throw myself out there. To do and try things that sound scary to begin with. With this specific creative process, many past experiences have obviously played a part. Both in the army, college and prison, guys constantly try to comply with the ‘man rules’. Don’t show weakness; be successful, be strong, etc., etc. So to be able to create an idea that takes on the same limits and labels you’ve struggled with yourself, was pretty inspiring.

LBB> What do you guys get up to outside of work to keep the creative gears well oiled?

Georgi> Spending even a day in new surroundings helps get these creative gears oiled. A change of perspective and a chance to see the world a bit differently. I find it healthy to leave my everyday bubble and get inspired by the greater world.

Jorgen> Last year I invented something I like to call the ‘bus lottery’. Actually, maybe don’t call it an invention, it’s probably been done before. But on Saturday mornings, I hop on a completely random bus in Amsterdam and take it to the end station. I walk back while listening to podcasts and taking pretentious pastel photos of stuff I bump into. ‘Where can I see them’, you’re ‘probably’ asking. It’s @thesibbern on Instagram.

Jorgen> With sports and beer being close to my heart, I have really enjoyed creating work for adidas and Carlsberg. Then again, a social mission brief like this is rare to come across. With an opportunity to actually take on societal issues, and to work alongside colleagues that have put in so much effort, this campaign is what I’m most proud of.

Georgi> This campaign is some of the work I'm most proud of. Anything that spreads a positive message in a world cluttered with a lot of negativity makes me proud to have been a part of.

Georgi> It varies from project to project. For this project in particular I was influenced, or more likely inspired, by my two younger brothers and by thinking what would have helped them feel reassured of themselves at a younger age. I suppose in general my biggest influences would be my upbringing, home, family, places I've lived, and the different kinds of people I've met. The world is a crazy place.

Jorgen> I watched a Netflix stand up special with Joe Rogan last week. He was pretty high when he said this so not sure if he remembers. But he referred to all people as ongoing calculations based on the experiences they have, the people they meet, the places they go. And I think creativity is kind of the same. You can’t really control it, but the more fun new things you shove into your head, the bigger the chances of something great coming out.

LBB> Do you have any tips to share for budding creatives out there?

Georgi> I only know what I did, so I'll say this: ask someone who you admire out for coffee and maybe they'll introduce you to someone they admire. Ask how they got to where they are, and see if it inspires you. And work hard, and enter contests for fun if you have the bandwidth. And side projects are important... both for your sanity and creative energy.