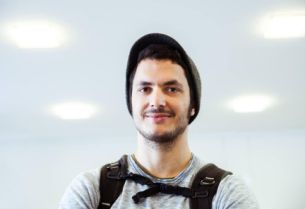 Technology is all about streamlining and simplifying, right? Click a few buttons and anyone with the talent and imagination can build worlds, films and images as slick and polished as the professionals.

…Well, that’s the typical narrative of creativity in the digital age, anyway. Eran Amir takes a decidedly different view on technology. An obsessive hands-on ‘maker’, he loves complexity and relishes filmmaking challenges – for him technology and digital tools are simply another part of the puzzle as he leaps between digital and analogue worlds.

His recent 360 music video for Mind Enterprises is a case in point. He cobbled together his own rig and experimented with technology and in-camera trickery to see where he could push this nascent medium. Oh, and his Making Of film was also created as a 360 film, another experimental first.

LBB> You’ve recently completed a 360 music video - how did you find the experience of shooting in 3D?

EA> What draws me to 360 video and VR is the excitement of exploring a completely new medium. It's not often (if at all) that artists get to do that - so I jumped in head first. In many ways it reminds me of the early days of film: no instant feedback on what you're shooting, everything is extremely time-consuming, and you're super sparing with how much footage you shoot.

When the technique was invented in the late '60s it was nicknamed ‘The Ultimate Display’. And it is - there is no bigger screen, no wider view, that's the end of the journey in that aspect. My Bachelor thesis was about low-budget VR production - and I can't wait for the first generation of indy VR creators to come into full momentum.

LBB> Tell us about the inspiration behind your vision for that project.

EA> Like many other projects it started with experimenting and playing around. I built my own 360 video rig and tried to see what I could do with it. As we're in the early days of 360 video there have not been many projects yet. I got extremely interested in interpreting Cinemagraphs in VR. I think it's a perfect match. The inspiration for the project was taking that idea to the extreme.

LBB> Your work is incredibly playful, a lot of it is captured completely in camera without the help of post for said tricks. Why do you enjoy working in this way and what led you to do so?

EA> It's mostly the absurdity of it all that appeals to me. My projects often start with a simple idea, then I ask myself, ‘what is the hardest possible way to do that?’ A lot of creative work starts with the exact opposite question: what's the easiest way to do it? For me that doesn't really work. In fact - I often come up with new ideas for projects but won't follow up on them because they are too simple to execute.

It might be a streak of masochism but what I enjoy most is working on tedious and Sisyphean projects. There's this quote I really like by Henry Collins: "I don't have talent - I have tenacity". I think that sums up the kind of projects I work on pretty neatly.

LBB> In relation to the question above, for ‘Black & White’ you painted an entire room (and yourself) different shades of grey to create your desired effect. What inspired that idea?

EA> Similarly it started with a simple question: what's something that is super easy to do digitally but insane to do in an analogue fashion? To this day this project was the most fun to work on. My strategy was to make one new object for the video each day, and follow that rule religiously. It involved so many different materials and techniques, getting messy, working with my hands - all of my favourite things. In essence I am a ‘maker’ more than anything else, and that project included a whole lot of making.

LBB> We’re big fans of ‘Run Baby Run’. What inspired both the narrative and for you to make a film in that way?

At the heart of ‘Run Baby Run’ is a concept called the ‘Flip-Flop’ (coined by Robin Sloan). It means jumping from the digital world to the analogue and back again. For example, you 3D scan a chair, manipulate the 3D model in some way, and then print it back to the physical world using a 3D printer. The idea is that by switching between the analogue and the digital - you get a certain "weirdness" which is not achievable if you stay only in one domain. That's basically what I did with the babies.

‘Run Baby Run’ actually started as nothing more than a test, or a proof-of-concept. However - when I designed the suitcase for carrying the babies suddenly the narrative was born.

So the suitcase is the key for understanding the whole piece - it serves as both the cradle and the grave - and we're all running like crazy between them.

LBB> How did you pull it off? Considering it’s another of your films with no green screen or digital help, what tricks and techniques did you utilise?

EA> The 3D model and animation were created by the incredibly talented Zolloc. After that came the meticulous process of 3D printing each individual frame of the animation. Each baby took hours to clean-up. With so much care and tenderness needed - at times it was very eerily like taking care of real babies.

The technical development that made shooting this in camera possible was a custom 3D printed rig attached to my tripod which kept all the babies at exactly the right angle. After that it was just a matter of keeping the background relatively stable and shooting one photo after the other like a robot. Shoot, Take Step, Switch Baby, Repeat. 3,000 times.

By the end of the process I would get calls on a daily basis from friends and family asking how the babies are doing and if they're all healthy.

LBB> How long did it take to produce and where did the production take you?

EA> The animation was shot in about a month and a half - but I didn't go anywhere special for the project. Luckily, that specific month included a trip to the US, Israel, and Germany (for other jobs) so I took the babies everywhere with me. Flying with a suitcase full of 3D printed babies was not fun, but eventually I got the hang of it - one of the airport security guys even subscribed to my channel.

EA> In a way this project would never have happened if I had had any idea of what I was getting myself into. It cost me all the money I had at that time to print the photos and I didn't even test the concept before to check if it worked. I ended up with a 20kg box of 1,500 photos, which I then had to carry around and get strangers to hold. At first that was almost impossible for me. Eventually I learned the best way to approach people to get them to agree it was like a social engineering game. After 10 days of blood, sweat and tears I reached my 500 people goal.

The flip side is that there was essentially no editing. About 90 minutes after taking the last photo, the video was already online

LBB> How do you keep your creative juices flowing outside of filmmaking? Does this element of trickery feature in any other creative outlets?

EA> I'm addicted to anything that has to do with making stuff: technical literature, arts and crafts, how-to's, old techniques, new tools… that's my bread & butter. Most of my ideas and experiments start there - trying to turn all the stones and see if there is any creative potential left anywhere. I can (and do) spend hours upon hours watching ‘How it's made’ videos, or gurus of the maker community like Jimmy Diresta or Adam Savage. As I watch that stuff I can almost feel my brain expanding.

EA> I grew up in Jerusalem. I was a pretty normal kid but I did have some weird games.

One of my favourites was creating enormous Rube Goldberg machines around the house; my parents were both teachers at the time so they let me go wild and didn't mind the total chaos.

My ultimate creation was a machine that pours you a glass of juice and drops an ice-cube in for extra style.

EA> There are of course the classics: Michel Gondry, Spike Jonze, Don Hertzfeldt - these are the kind of people I idolized when growing up. On the more technological/futuristic front I am fascinated by the experiments made by Daito Manabe and by the BRDG group. Watching their stuff is like glimpsing into the future. On the pop and entertainment front I am addicted to anything Dan Harmon touches and anything Nathan Fielder does.