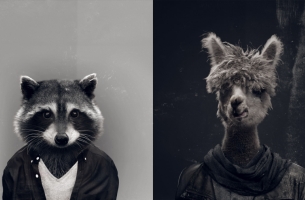 Back in December a Johnnie Walker film appeared online. Within a day of being there it had already racked up 1 millions views. You’ve almost certainly seen it. However the film we speak of isn’t an official Johnnie Walker spot at all. ‘Dear Brother’ is a lush, heart-wrenching spec ad that was written and directed by Dorian Lebherz and Daniel Titz (a.k.a. Dorian and Daniel), a young duo from Germany’s Filmakademie Baden-Württemberg. The aspiring filmmakers had achieved what most advertising professionals can only dream of – they’d created something that was shared and adored far beyond the ad industry.

LBB’s Addison Capper caught up with the duo to find out what inspired the story and what they’ve got planned for the future.

D&D> Daniel was born in the north and Dorian in the south of Germany. We both grew up in small towns.

LBB> When and where did you first meet? Why do you think you work well as a duo?

D&D> In 2012 our paths crossed when we both started studying commercial directing at the Filmakademie Baden-Württemberg. In our second week we pitched for a small project together. We never had thought about directing as a duo but when it came to shooting it we wanted to try it out. It worked pretty well.

We like the same things and think in the same directions but we benefit most from the situations in which we disagree. If that happens we are both forced to defend our ideas and consider the other’s argument. That’s how you get to a point where you think about things in a totally different way from if you had done the project on your own– and that is very important.

LBB> When did you both realise that you wanted to be directors?

D&D> Both of us were born in small towns that didn’t have much more to offer than fields, cows and a TV with three channels at the most – and that was depending on the weather. But since the grass is always greener on the other side, that might have been exactly what we needed to find our way to film. We both had an interest in film early on, more precisely in telling stories visually, and wanted to go out and experience something.

LBB> The narrative for Dear Brother, the Johnnie Walker spec ad that went viral, could be for a feature film. How did you go about instilling so much emotion into 90 seconds?

D&D> From the start of the film, we give the viewer small visual clues to create the feeling that something is wrong. That’s why the dead brother’s glass is broken or the camera framing is always focused on the living brother. We love making up details that you might only catch on a second or third viewing. By adding a backstory of the characters, like the parents’ old house, we gave them a past. That makes you understand their feelings and allows the viewer to empathise.

LBB> The two actors give fantastic performances. How did you cast them and what kind of conversations were you having with them during the shoot?

D&D> The casting was a whole new experience for us. It was our first time working with British actors. We found our two actors on the platform ‘Spotlight’ and were greatly supported by Ashton Hinkinson Casting who helped us in reaching out to the agents… they really had a lot to do since we had asked for no less than 40-50 actors to send us e-castings based on a short script we had prepared.

After looking at thousands of faces we found Robin Guiver and Mathew Lewis-Carter. And we really have to say that we are so excited by the skilful precision and timing of our two actors. We talked with them about the story of the two brothers, their backstory and their goals a lot before shooting. And it totally paid off because in some situations, like by the river, we were not really able to talk. The water was so loud it made a conversation impossible, but not many words were needed anyway as we made everything clear before.

D&D> We wanted the film to be located in what we associated with a typical Scottish landscape. Since our time was limited to three days for the shoot and neither of us had ever been to Scotland, we started scouting possible locations online. There are a lot of great tools available these days such as Flickr, Google Streetview and Panoramino, which helped us to find the exact coordinates. Most of them were located on the Isle of Skye so it made sense to shoot there.

When we arrived on the Isle of Skye we already had eight places in our minds and just had to drive by and check if they still looked like they did on the pictures. Surprisingly the cliff at the end of the film was the hardest location to find. You might think this should be the least problematic scenery to find in Scotland. But we always wanted the cliff to reach out into the sea much further and had planned to shoot a 180 degree circle, so there was no chance to cheat. We spent an entire day jumping from one cliff to another hoping the next would be the one. Let me tell you – they appear much closer than they are.

LBB> What inspired the idea and story?

D&D> Shooting outside of Germany was something we both wanted to explore and since neither of us had ever been to Scotland, shooting there seemed like an amazing opportunity to get to know this beautiful country. We started by researching brands that originated in Scotland and especially brands we associated with the unique landscape. I think this is a very important step.

As students, we have the chance to make up a story and search for a brand afterwards. But this can often lead to a film that’s great but also leaves the viewer wondering what the brand has got to do with the content. We decided to go with Johnnie Walker because we liked their ‘Keep Walking’ strapline very much – it was still up-to-date at that point. We love storytelling, that’s why our goal was to tell a story that creates deep emotions within a short period of time and was based on the message itself.

We also tried to add small visual clues that create the feeling that there is something wrong. As we said before, we love making up details that people might never see.

LBB> You were recently featured at the Regielounge in Berlin for your work on the film. How was that experience for you?

D&D> The Regielounge was a great experience. It was great meeting so many like-minded people and getting direct feedback for your work. It was an honour to be featured beside the other five great filmmakers. All of them were very different but everyone had something really special in their work.

LBB> What kind of reaction have you guys personally received from the ad industry since Dear Brother launched?

D&D> To be honest, we were overwhelmed by the feedback. Back in December we were on a shoot for our next project, so we were very busy at the time. On the morning we started shooting, ‘Dear Brother’ had 50,000 clicks on YouTube – which was already way more than we had expected. So when someone told us after the wrap that day that we had just hit one million clicks, it was hard to believe. We thought a film had to be funny and eccentric to make some noise. We are delighted that people seem to appreciate a good story and an honest and emotional film like ‘Dear Brother’.

D&D> ‘The last one’ is a five-minute branded short we shot two years ago. We wanted to connect good storytelling with the brand. Times are changing and commercials along with it. Those commercial breaks that viewers were forced to watch on TV are over. We will have to think about how commercials should be done in the future and in what way they implement the product or the brand. Content will get more and more important.

D&D> We have always loved emotional storytelling and always will. But fortunately we have a few more months to study, allowing us to explore different tones. Storytelling is what we do and what we love and we will not lose it. But we want to try out different tones, styles and genres. We are currently working on a commercial that will make you laugh – hopefully. In the long term we are very interested in telling a story in more than 90 seconds.

D&D> We love the work of Ringan Ledwidge and Dougal Wilson. They both have a very unique style.