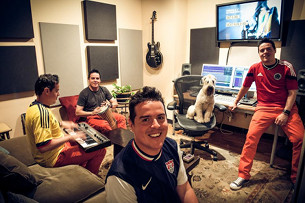 Music has always played a big role in Diego Jimenez’s life – as a kid in Colombia he learned the piano and played drums in a punk band. But it was seeing the impressive recording studios that inspired him to follow a more engineering-focused route. Aged 17 he moved to Miami to study at the School of Audio Engineering, and after a first break assisting on a childhood friend’s short film, Jimenez is now a Sound Design/Audio Engineer at HOBO Audio in New York. He caught up with LBB’s Addison Capper to reveal what makes him tick.

DJ> I grew up in Ibague, a small town in Colombia about three hours from Bogota. I was a regular Colombian kid from the 80s. Besides watching all the violent news on TV about the war between drug cartels and the government, I played soccer with friends, went to school, played the drums and was forced to learn the piano by my mother, which is something I now thank her for.

LBB> What inspired you to pursue sound design as a career?

DJ> I've been always attracted and curious about sound. Back in Colombia, when I was 15, I played drums in a punk band and loved setting up a couple of cheap microphones to record our set on a cassette player. Along with playing in a band came the need to buy records, CDs and magazines. I loved the pictures of bands inside recording studios with huge mixing consoles and all of the producers and engineers working. It looked like something that was both fun and serious. I moved to Miami when I was 17 and after high school went to the School of Audio Engineering (SAE), Miami to study audio. After I graduated I started assisting at some local studios, but my first break came when a childhood friend asked me to help him with the sound design on his short film. He worked out of an audio post house in Los Angeles. After that experience I knew what I wanted to do for the rest of my career.

DJ> SAE gave me the basics, but I've learned (and am still learning) the most from all the talented people that I have had the pleasure to work with – as an assistant in Miami through to today at HOBO where we have an amazing team that helps me grow as a sound designer.

LBB> You recently completed the sound design for the superb Human Revolution short film. Tell us a bit about that project. How did you inject that real cinematic sound to it?

DJ> Moe Charif, the director, first contacted us to work on the film after several attempts with different sound designers didn’t quite fit his vision.  Moe’s film had a lot of CGI and green screen work but not a lot of production sound – just the dialogue – so it gave me a lot of freedom to create this entire sonic world.  We put together some audio ideas, then discussed what was helping the visuals and enhancing the experience. Our goal was to give the audience a full cinematic experience – that’s why we created a lot of custom sounds – to give the piece a unique sonic color. HOBO President Howard Bowler and Sr. Engineer Chris Stangroom helped the project with some great ideas about how to use silence to heighten a scene’s tension. There were moments where we just needed to mute everything and leave one key sound to create a mood.  Everyone that worked on this project put a lot of heart into it, which is why it turned out so great.

LBB> Which other projects that you’ve been involved in recently have you particularly enjoyed and why?

DJ> I recently worked together with HOBO Sound Designer Max Holland on two interesting projects. One was a TV spot for NBC Sports, where you experience the feeling of being a Formula One driver through the POV of driver Lewis Hamilton’s helmet. We also worked on more than 200 elements for the recent rebranding of the kid-targeted network NICKTOONS. Both of these projects helped me grow as a sound designer and tested my creativity.

LBB> How do you, personally, achieve the perfect sound design?

DJ> I think every sound design project is unique, and that's what makes it special. You have to bring fresh ideas every time you start a new project. It’s critical to start by understanding what the client wants. From there we like to watch the visuals – if you watch and listen closely, the picture will tell you what sound it needs. With all the technology and tools that a sound designer has nowadays, it's very easy just to do what's been done already. But to really make a difference you have to go beyond just using the tools. You have to dig deeper and create something different. The last thing I do before completion is listen closely and ask myself if the sound design is enhancing the viewing experience or not.

LBB> What kind of role does sound and music play in your personal life?

DJ> Sound is my passion and my life; music is an opportunity to explore and create.

LBB> And what do you like to get up to outside of work to keep your creative batteries charged?

DJ> Running. For me, running is one of the most complete sports – it's my form of meditation. Long runs help me think creatively, keep me focused and full of energy. I ran the New York City marathon in November.