Wieden+Kennedy Amsterdam Account Manager on food, The Kennedys and being ‘Camayzing’ for P&G 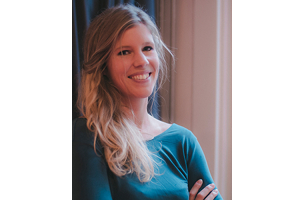 Born and raised on the beaches of New Zealand, when it came to leaving home and going to university, Charlotte Jongejan decided to head to the flatlands of her father’s native Holland to study. Despite completing a course in European Studies, History and English in the Dutch capital, she decided that a career and life in politics wasn’t to be. And so, after a post-university stint asa self-employed translator, Charlotte found herself at Wieden+Kennedy Amsterdam, deep in the unique cultural melting pot of the Dutch ad industry. She caught up with LBB’s Addison Capper to chat about handling a big umbrella account like P&G and how working in W+K Amsterdam’s apprenticeship programme, The Kennedys, has spurred a love of copywriting.

LBB> You were born and raised in New Zealand but educated in Europe. Tell us a bit about that…

CJ> Well, my father fell in love with a Kiwi and that marked the beginning of a very tricky commute that lasted over 35 years. My brother and I had the fortune of growing up on the beaches and in the mountains of New Zealand’s South Island (horses, pigs and BBQs included) and then moved to Europe when I was a teenager. Going to university in Amsterdam was great and I travelled a lot, spending some time in France for uni and generally having a pretty great time.

LBB> How does your global outlook inform your approach to work?

CJ> I grew up between two continents and within a very colourful and mixed group of friends and family. We always had a fascination for other cultures, other languages, customs, foods, smells, views. I don't feel grounded to any one place, more to people and experiences. This of course influences my life in many ways, including my work.

LBB> When and why did you finally decide that you wanted to get into advertising?

CJ> After I graduated from uni, I was quite sure I did not want to get into politics, at least not yet. So I started my own translating and editing bureau and worked for a few years as a self-employed wordsmith. The work was steady, but the lonely freelance life was not for me. Advertising had always fascinated me, how brands can speak to people through music, art, poetry, even philosophy. When I heard there was an opening at Wieden+Kennedy Amsterdam, the best independent agency in the business, I jumped at the chance.

LBB> How long have you been at Wieden+Kennedy Amsterdam and how do you find the culture within the agency?

CJ> I started at W+K Amsterdam in 2012 so have been here over two and a half years. The culture within the agency is hard to describe. Maybe the best word is ‘energetic’. We are creative, ambitious people of more than 20 nationalities buzzing around – filming ping pong battles, writing scripts, painting wolves on walls, coding voice-automated websites, flying drones, 3-D printing jewellery, organising epic dress-up parties, singing, laughing, sometimes crying. These are more than colleagues, and this is definitely not your average office job.

LBB> Prior to your account manager role, you were employed at W+K as an assistant to the management team. How did that role help shape your skills as an account manager?

CJ> Working with the management team was a fantastic learning school. I was exposed to all aspects of the business, learnt the process and saw first hand all the work being made while working with every department within the company. The management team was hugely supportive and helped make the transition a smooth (albeit still slightly crazy!) one.

NSA: We Are Who We Become /  Copywriter

LBB> You were involved with The Kennedys apprenticeship programme. How was that experience for you?

CJ> Judd and Alvaro (Judd is the Kennedys Producer/Fearless Leader and Alvaro the founder and Creative Director) asked me to jump aboard the Kennedys train to help on the account and production aspect for the Class of '13. That year was unlike any other, I loved working with them all and ended up becoming more and more involved in the creative side of the projects. Last year The Kennedys helped me discover and develop my love for copywriting, and I could not have had better mentors or teammates.

LBB> You work on the P&G account – what are the key challenges when working on a huge global ‘umbrella’ brand like this?

CJ> Last year we were charged with the challenge of re-launching a P&G heritage brand (Camay) to young women in China. We ended up writing and producing a hilarious, colourful K-Pop inspired music video with a rising star in the Chinese pop scene named ‘Camayzing’. I still find myself singing the song in the shower! Taking more established brands and working with the client to revamp them in creative, culturally relevant ways is what makes working with P&G so interesting.

LBB> Which projects that you’ve been involved with recently have you really enjoyed and why?

CJ> I've been lucky enough to have worked on a few very special projects with The Kennedys as a copywriter, which both went live towards the end of last year; We Are Who We Become (supporting the 'Sports for Development program for young people in developing countries) and Free Our Voices (for Child Helpline International). I love working with a team to solve a business problem of a client in a creative way, and it’s great to be building up experience on both the creative and the account side.

LBB> Outside of work what do you like to get up to?

CJ> I am a food obsessive. Reading restaurant reviews, eating out, cooking for and with friends, food shopping, food magazines, writing about food, painting food. Yeah, it's pretty bad.