Costume designer-turned-commercials director on working with Spike Jonze, sharing Tic Tacs with Michael Jackson and his love of comedy 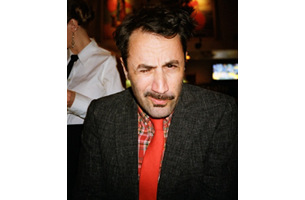 Casey Storm isn’t necessarily ‘new talent’ in that he’s new to advertising and filmmaking. Prior to signing for Anonymous Content as a commercials director in September, he spent the past 20 years as Spike Jonze’s costume designer, working on films such as Her, Being John Malkovich and Where The Wild Things Are. He has also worked with the likes of Tom Kuntz. His passion, however, is directing and the comedy world is where wants to be, so he took the plunge and became a fulltime director. LBB’s Addison Capper chatted with Storm about his new life as a director, and how beers in Reno and a hashed together job for the Beastie Boys led to 20 years of success with Jonze.

LBB> Why was now the right time for you to properly pursue directing?

CS> It’s something I had been thinking about for a while. I had said everything I wanted to say in costumes and I wanted a bigger challenge. While costuming, I found myself getting involved in other departments and being interested in the bigger picture and I knew for a long time that I would make the move over to directing at some point.

LBB> You were Spike Jonze’s costume designer for 20 years. How did you guys meet? Why do you think you hit it off so well?

CS> Spike and I met through mutual friends in 1993. It’s a long story but we wound up in Reno, drinking Michelob, and that was the beginning of our friendship. I think we latched onto each other because we were of a similar mischievous mind-set. We were young and creative and loved getting into trouble.

LBB> You first worked together on Beastie Boys ‘Sabotage’ in 1994. How has the way you collaborate evolved from then?

CS> Sabotage was my first costume job. I basically ran around to thrift stores and threw clothes in the trunk of my car. We would often come up with character ideas while we were shooting. The process has obviously evolved, but some of the same ideas are still around. We do a lot of tinkering and trying. For example, on Her, when we were trying to figure out the style for the film, I bought a bunch of used clothes and we did an initial fitting where Spike tried stuff on and we talked about whether it worked or not.

LBB> Where does your passion for directing come from?

CS> It comes from my dad originally. He was a sitcom director and I grew up on the sets of Taxi, Laverne and Shirley, Mork & Mindy, Alf, etc. I fell in love with being on set and loved the relationship between actors and directors. I was always directing short films and music videos as a kid.

LBB> And where did you learn your crafts of costume design and directing?

CS> I learned costume design just by doing it. I had no experience. I always loved clothes. I dressed like Michael Jackson one year. And I wore a purple paisley silk robe to prom. Spike knew I liked clothes and asked me to help him out and the rest was history. Sometimes I think that not studying costume design is what makes my style unique. Doing it ‘wrong’ might have helped to make it look more interesting.

LBB> How would you define your directorial style? Comedy is your thing, right? Why do you enjoy exploring that?

CS> My directing style is about the performance more than the visual look. I love improv and all comedy acting and I love to ad-lib and explore throughout the process. Capturing new moments often make for the best scenes. Comedy is in my bones. My grandpa was a Vaudevillian comic and my dad was a stand-up comic. He later became a comedy director, initially, as a right hand man to Woody Allen.  My life is about laughter so it makes sense my job would be too.

LBB> You recently joined the roster at Anonymous Content. Why was the company perfectly suited to lead your venture into directing?

CS> I’ve had a relationship with Anonymous Content forever. When I got started in costumes, Steve Golin was at Propaganda and that’s where all my jobs were. He now runs Anonymous. I’ve worked there as a costume designer and developed relationships with a lot of people there, most notably Eric Stern who’s the commercial EP. Also, they don’t have a cramped roster of comedy directors so there’s room for me there to develop.

LBB> Why did you decide to pursue commercial filmmaking?

CS> I guess it seemed like the most natural, ‘easy’ way to transition into directing. I’ve developed so many relationships over the years while working on ads and I felt that those relationships would be helpful in terms of getting a directing career started. It’s a hard job to crack and I knew I would need friends to give me those early chances.

LBB> What are the most memorable projects/films that you’ve worked on over the years and why?

CS> My favourite job ever was costuming a Michael Jackson video, Stranger in Moscow. He was my hero and he threw Tic Tacs at me in a friendship flirty kind of way. I’m most grateful for my relationship with Spike and the creativity and opportunities that have come out of that. Working on Zodiac with David Fincher was also a highlight. In my young directing career, every job is a treat because I am learning and growing.

LBB> What have you got planned for the next 12 months?

CS> I’m focusing on both comedy commercials and also sketch comedy. There’s a bunch of great comedy actors that I know from different parts of my life and we’re working on developing some projects with them. I also have a comedy horror film that I’ve been trying to get together for a while.  It’s dumb and great.