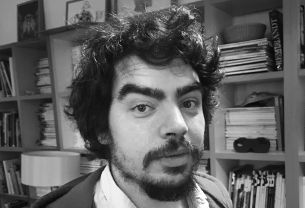 Bertholovitch was working at an ad agency when he began doodling on Post-it notes. Those doodles eventually led him to quit his agency life to become a full-time animator. He began work on a series of short films, honing a style that is undoubtedly his own. Drawing had always been close to him though - prior to working at an ad agency, he produced his own comic and was an art director on children’s books. Nowadays, he’s repped by Wizz Design in Paris.

Bertholovitch was working at an ad agency when he began doodling on Post-it notes. Those doodles eventually led him to quit his agency life to become a full-time animator. He began work on a series of short films, honing a style that is undoubtedly his own. Drawing had always been close to him though - prior to working at an ad agency, he produced his own comic and was an art director on children’s books. Nowadays, he’s repped by Wizz Design in Paris.

LBB’s Addison Capper chatted with him to find out more...

LBB> You worked in publishing and advertising before dedicating yourself to directing - what kind of roles did you hold and where?

B> First I was an artistic director for children's books before turning to advertising. First for an agency called LEG in Paris, where I had the chance to work on accounts such as SFR, Nike, Eurostar and Les Inrockuptibles. Then I found myself at JWT Paris where I had my first experiences on shoots. Meanwhile I found the time to do a comic that didn’t do so well but hey, it was a beautiful experience.

LBB> When did you first start experimenting with animation?

B> I've always drawn and secretly wanted to do animation but I only really started about a year and a half ago, almost by chance by drawing on Post-it notes in the office. I've realised that it was something quite instinctive to me and I was having so much fun that I decided to stop everything to do just that.

LBB> Your trademark style is hand-drawn animation on post-it notes - when did you first start experimenting with that? And what inspired you to do so?

B> It's really a coincidence. I had some time at the office and there were Post-its around. I realised that I could put them on top of each other and they were transparent enough to see the previous image. From there I started to improvise animated sequences overnight. Back then, I worked in an open office space and the advantage of drawing on Post-its was it being discreet. No one understood what I was really doing.

LBB> I love the films, they’re like the perfect mix doodles and flip-books - two of my favourite childhood pastimes. Would you agree with that?

B> Totally. I think what makes my style is that I approach the cartoon the wrong way, from the start. When I started, I hadn’t thought about all the possible shortcuts that can be used to save time and had gotten used to redrawing image by image even for a setting or a fixed shot (eg. Gif Tramp). Today I think that’s what allows me to create some magic through my films and make my characters more vivid.

LBB> Is it quite a lengthy process to work in that way?

B> On the contrary, since the format is very small, I didn’t sketch and instead launched immediately into the animation without necessarily knowing how the film was going to end. I was going very fast. Today it’s a little bit of a longer process. I'm not alone at my drawing table so I have to work within the logical boundaries of production somewhat. I spend more time writing and storyboarding in order to work with others. But I keep a style that allows me to be fast.

LBB> A lot of your illustration work reminds me of old school comics and picture books. Why do you enjoy working with that style?

B> This comes from my childhood. I approach drawing as something instinctive, and something that can’t be good once you start hiding behind effects or tricks. I try to be honest when I draw and that means I automatically include my taste or my references in my drawings.

LBB> Where do you look for inspiration?

B> I grew up in a small town where I had plenty of time to do nothing and dream.

LBB> What do you get up to outside of filmmaking and illustration?

B> I just had a little girl, so that takes up the rest of my time these days.

LBB> What are your aims for the next year ahead?

B> I have lots of ideas, short films, animated series, etc. and I’m hoping that some will see the light of day. It’s also in mind to get onto working on a long film, something like Bill Plympton, but this is still a dream.