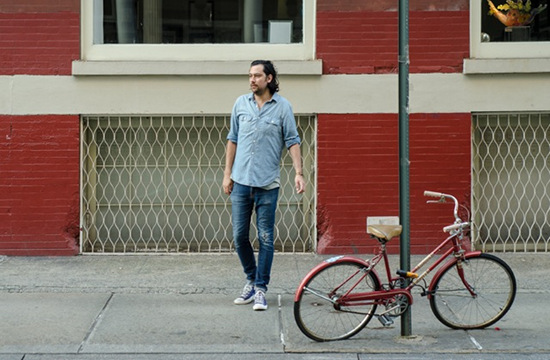 Born and raised in Colombia, Alejandro Gomez Sanchez jumped on a plane to Australia because he ‘knew nothing about it’. His planned two-year road trip turned into a bit of a love affair and he is still there to this day. He is also a Creative Director at Eclectic Music Machine producing award-winning soundtracks for commercials and currently recording a second EP. Addison Capper found out what makes him tick Down Under.

AGS> I was born and raised in Bogota, Colombia. I am the youngest of three siblings, and apart from being handed down all my teenage brother’s clothes, I would also listen to all of his records. At 8 years old I would play air drums while listening to Pink Floyd, The Cure, Depeche Mode, Metallica, local merengue and salsa artists. I was growing up in a household where I had to act older than my age to be taken seriously, so music played a pivotal role.

LBB> You studied music and sound engineering at the Pontificia Universidad Javeriana in Colombia and then moved to Sydney, Australia to further your studies. Why did you choose the city? Creatively, what is it like?

AGS> To be honest, I chose Australia because I knew nothing about it! It was the most exotic place I could think of at the time, and probably the furthest away from Colombia. I originally wanted to study in New York City but heard that the same course was being offered in Sydney.  I jumped on a plane with three other friends on what was going to be a two-year road trip – little did I know I would still be in Sydney 13 years later. From day one in Sydney I was surrounded by great musicians, producers and bands which inspired me and encouraged me to hone my skills.

Early on I recorded bands like Kid Confucius and played around Sydney with local bands like Watussi. I’ve always felt that Aussies are drawn to Latin culture – that has opened a lot of doors for me. Creatively, due to the fact that Australia is a young country, people are encouraged to experiment and to learn about new cultures. It makes Sydney a very exciting city to live in.

LBB> How did you wind up in the world of advertising?

AGS> It was through my sister. She introduced me to the first person that ever showed me what a Protools system did. It was one of her teachers at university who also worked in advertising out of his own studio. Apart from writing soundtracks, this guy also did sound for motion graphics and had tons of people coming in and out of his studio all day. I assisted him and he asked me to play guitar on a few of his tracks. I had such a great time with him at the studio that I knew I wanted to work in music production once I finished school.

After uni, I got involved in post-production and fell in love with the creative process. My first job was at Sound Reservoir in Sydney, working in the tape room. Pushing buttons, I knew I had a long way to go before I would be sound designing and writing music, but again, I’ve always found Sydney to be an encouraging place to work in.

LBB> In 2010 you won 'Best Original Music for an Advertisement' at Australia's AWARD Awards for your work on Steinlager Pure. What effect has that had on your career?

AGS> The whole job was incredible. Firstly I had the chance to work closely with Chris Riggert at Finch, whose work I really like. I remember I was so excited about working on that job that I wrote about three tracks before we even looked at offlines. Once we were happy with the music, I asked US producer Joel Hamilton (Blakroc, Elvis Costello) to mix the track, who did an amazing job. So when the whole project came together it was awesome.

I was honoured to get an award, but I think working on the soundtrack with such amazing people was its own reward.

My favourite composition is the soundtrack for the Toyota Deconstruction. I really love the fine layers and textures created by the pulsating synths in this track. It took me a while to find the right balance of sounds, in order to create a mysterious mood that wasn’t too dark. There was a fair bit of tweaking between the creative and me, which led us both to explore different sounds and approaches. It was a great journey.

AGS> Probably the people who most inspire me to write music for the screen are Gustavo Santaolalla (Babel) and Jonny Greenwood (There Will Be Blood). Santaolalla is a music producer in his own right, yet I really love the use of the Charango in his music – this instrument isn’t a usual instrumentation in music for film. He creates haunting soundtracks that always evoke deep feelings. I also loved Jonny Greenwood’s There Will Be Blood soundtrack. He used an orchestral ensemble, yet the dark moods conveyed are of incredible depth and so out of the ordinary.

AGS> I’m in the process of recording my second EP, which will be finished by October. Eclectic is also planning on expanding its client base into the USA. We are embarking in a huge enterprise, but we are living the dream.

LBB> Outside of work, what do you get up to?

AGS> I love running marathons, half marathons, city to surfs and the like. I also love live music and a good whisky...