Urban landscapes, spray painting and skating all feature in 'Cut Me Up' 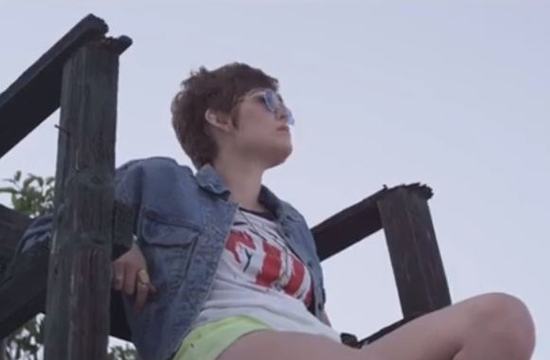 He gives a bit of a background on how he came to use Radar: "I'd moved to LA six months earlier to accept an internship with a great commercials production house which has a stable of dream team directors on their roster. After a few months of coffee and chai-mocha-latte-with-two-sugars-not-three runs for the producers, I was given an amazing opportunity I wasn't anywhere near ready for. A good friend who ended up producing Cut Me Up put me up to be the assistant of one of the directors. And for the next few months, I was doing everything from ordering new Nike's, to taking the family pup to the vet and being privy to his creative process. After a while, he said, "you didn't move half way around the world to be an assistant, did you? " I was taken aback, but he was right. He knew my ambitions, and a lack of what I'd considered decent film school education led me to believe that this role would serve as a defecto crash course of the ins and outs of the film industry.

After the conversation, he simply said: "Film-makers make films. Find a way to live off bread&water, and make it your only focus." A week later, he gave me the push I needed with a swift and merciful firing. I'd been submitting treatments to Radar and showing my shorts around town in the hope anyone would bite, but nothing. A couple weeks pass, my visa situation starts to get funky, and then bam-Stanton Warriors to the rescue. I got a really nice email & call from, of all places, a commissioner from Sydney. And yeah. I haven't spoke to Mark since his inspirational kick in the ass (which, for the record, was due to the fact I was the single worst assistant in LA).

I built a treatment around a vision of a Los Angeles set version of The Warriors, one of my favourite films and also a key influence of Mark&Dom. It was crucial to avoid the clichés of ripping off  the best gang films to date, so we looked at exploring more of a story than just a character vignette as planned. The DoP, Lowell Meyers, is a skateboarder and instantly clicked with the idea and the track. The video wouldn't be half of what it is without his audacity and understanding of that world.

I swear to god, we've got footage somewhere of him skating with the Epic, weaving through traffic and pedestrians, and never missing a beat. The producer, Ari, was having a heart attack, but it was just amazing to watch. Of course, you can't make a music video about a gang without being compared to Romain Garvas' seminal promo for Justice's "Stress". I really hoped to distinguish our Stanton's by playing on the stereotypes of the characters we're presenting. If they were a male skate gang they'd all be labeled douche bags, but I think something works by playing into the melodrama.”

This video was also Central Station Records' first commission through Radar. Aniela (all the way from Sydney) said: "This was Central Station Records' first time working with Radar and it was such an easy process! We had plenty of treatments to choose from, but Edward Drake's was the clear stand out for the artists and all of us at the label. Edward and his team were a pleasure to work with, with lots of initiative, able to work within the budget and always took our suggestions on board- no matter how trivial they may have seemed! We are all over the moon with the result of the video."