New Royal Navy Campaign Urges You to Break the 'Everyday' 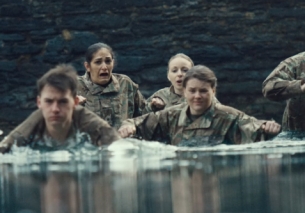 This week sees the launch of the Royal Navy’s latest recruitment campaign for the Royal Naval Reserve (RNR) with a 60 second TV spot.

It marks the first stage in the roll-out of the RNR’s new positioning, ‘Don’t do the everyday, every day’. The idea stems from the wealth of new opportunities and experiences that the RNR provides, which people can fit around full-time civilian jobs. The campaign aims to show potential recruits how the RNR can build on an already exciting life by offering experiences that you wouldn’t normally get, and allowing you to do things you simply wouldn’t do in your everyday life.

The 60 second spot, created by WCRS, tells the story of one reservist’s journey and what she accomplishes in the RNR. The script focuses on Wednesday as the day that opens up a world of opportunities (many of the Reserve units around the country meet on that evening). As the story develops, we see how the RNR takes our hero outside of her everyday life and allows her to gain unique experiences.

The spot was directed by Max Fisher at Outsider, who has previously worked with the Royal Navy on their Regulars recruitment as part of the ‘Made in the Royal Navy’ campaign.

Paul Colley, Head of Marketing, Royal Navy: “‘Don’t do the everyday, every day’ just leapt off the page and captured everything we wanted from the brief we gave WCRS. The Royal Naval Reserve is not for people with spare time on their hands, but for those that want to live life to the full and want to take life’s opportunities. The team at WCRS in our opinion have got this bang on and delivered a creative execution which dramatically delivers on the question: ‘Why join the Royal Naval Reserve?’”

Jules Chalkley, Creative Director, WCRS: “For the Royal Naval Reserve we set out to create a campaign that has a dramatic and visceral feel to it, something with real energy and emotion that connects with our target audience – a very dynamic group of people who are on a quest to push their own boundaries and live life to the full. Whilst the work builds on our Made In The Royal Navy campaign, we wanted to create a powerful identity for the RNR. ‘Don’t Do The Everyday Every Day’ is a distinctive and flexible platform that we’re really excited about developing. ”