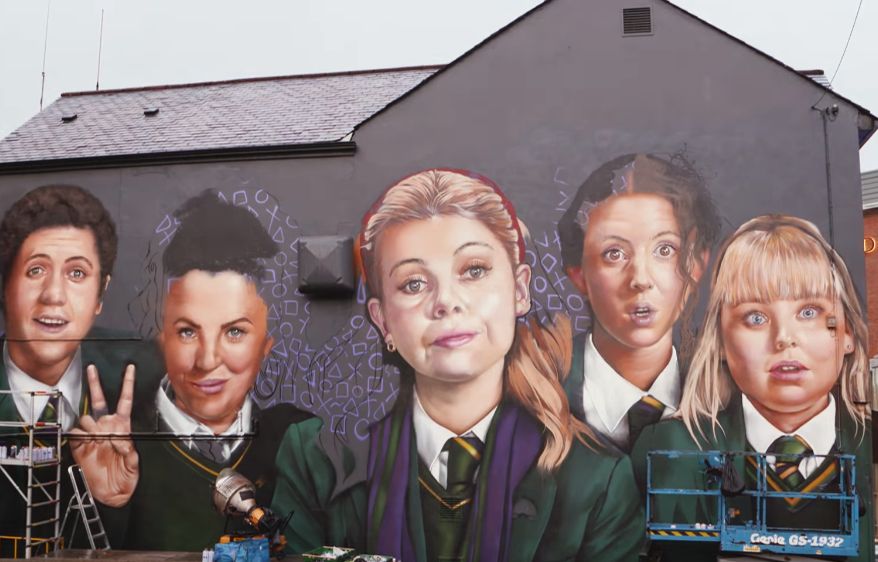 Channel 4 has today launched its full marketing campaign for the new series of hit comedy, Derry Girls, produced by 4Creative for Channel 4 Marketing.

Inspired by the tradition of murals in Derry, the campaign features at its heart posters of a celebratory mural of the cast commissioned by Channel 4 and created by Derry not-for-profit social enterprise group, UV Arts. This kick-started the project and gained traction on social media last month.

The UV Arts team, who use street art as a tool for social change, immortalised the main Derry Girls characters - Erin, Orla, Clare, Michelle and James – in paint onto an entire side of a building in Derry’s city centre. The new posters will also include a playful reference to fan favourite, Sister Michael, looking out of a window.

The attention-grabbing mural was created to celebrate the return of the series, and to mark the incredible support it received from the local community. It took the artists five days to complete and received an overwhelmingly positive reception from the Derry community and the cast.

As well as on posters, the artwork will be feature on press cover wraps and will be supplemented by clip-based assets that will run on TV.  Social media activity will include '90s ‘school pics’ of the cast, and ‘Derrytext’, an @Channel4 Instagram story inspired by services popular in the '90s such as Teletext, Ceefax and Fivetext. Users will enjoy everything from updates about the weather in Derry to ‘spiritual guidance’ from Sister Michael.

James Walker, head of marketing at Channel 4, said: “The collaboration between 4Creative and UV Arts has resulted in a fantastic artwork that has already generated lots of buzz and excitement and community engagement locally for the return of the show. We’re incredibly proud of the series so by supporting its return with a large national campaign we’re able to build anticipation and make a bold statement across the UK – our hit comedy Derry Girls is back!”

Eoin McLaughlin, creative director at 4Creative, said: “My family are from Derry, so I know first-hand how proud everyone is of the show. By launching the campaign for the second series with a mural in Derry, the city has a fantastic new landmark that recognises the tremendous support the show has received locally and also celebrates the city’s culture, its people and their spirit.  We have developed a truly exciting visual campaign that captures the mischief and humour of the characters and the essence of the show. Pure class, as they say!”

Derry Girls is the creation of acclaimed writer Lisa McGee who has mined her own experiences to create a candid, one-of-a-kind, family-centred comedy set against the backdrop of The Troubles. The first series aired in January 2018 and received an overwhelming positive reaction from viewers from around the UK and particularly from the local community in Derry, making it Channel 4’s biggest comedy launch series in 14 years.

The series returns to Channel 4 on Tuesday 5th March at 9.15pm.