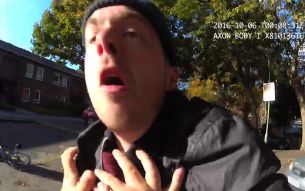 AMV BBDO has created a new campaign for the Metropolitan Police Service, called Body Worn Video, to highlight the roll-out of body-worn cameras to all public-facing officers, making the police more transparent and accountable.

Recalling a moment from memory can be difficult, especially when in a high pressure situation. People can remember an incident differently and be absolutely genuine in their recollection.

With this film you can experience how useful a tool Body Worn Video is when portraying what occurred at the scene.

The film is shot from the perspective of two separate body-worn cameras from officers attending an incident. The audio from the witnesses, who are recounting the incident, juxtapose with the recording captured by the body-worn cameras. It shows the difference between the personal perception of witnesses and images shot by a camera.

Supt Adrian Hutchinson from Metropolitan Police Service said: “With Body Worn Video we are launching what is thought to be the largest rollout of cameras anywhere in the world.  It will support the public and our officers in many challenging incidents, giving us a valuable additional tool.  Video can capture events in a way that can’t be represented on paper and in this film we hope to convey both the strength of the technology itself and the benefits it brings."