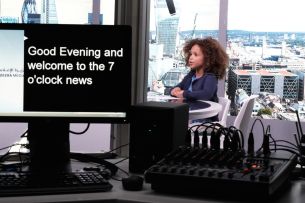 KidZania London is a 75,000sq ft child-sized City, where the kids are in charge. Complete with its own currency, university and more than 60 jobs for children to experience, the concept, designed to inspire, challenge and empower kids is located inside the Westfield London shopping mall in Shepherd’s Bush.

Filmed from a kid’s perspective, the creative execution developed for children by children aims to encourage them to explore the world of opportunities open to them.

The principle that “children can only aspire to what they know exists” is fundamental to the positioning of the KidZania brand. Working with Grey London, the through the line launch campaign invites the next generation to “Try the World On For Size”.

The docu-style TV ad is directed by Karen Cunningham, who was most recently celebrated for her award-winning work for Barbie. The commercial, shot inside KidZania, features six children in six different KidZania jobs wearing professional uniforms and working on sets scaled down to ¾ size.

Each child is cast in a role that reflects their aspirational job role. The genuine ad-libbed script reveals the children’s hilariously intuitive responses; “It’s not a job. It’s a calling”, says a young Theatre Director. “I see surgery as an art form, it is vital to keep a cool head”, claims the child playing a Surgeon.

The campaign follows the launch of a ‘micro’ version of Grey London within KidZania earlier this year as part of the agency’s commitment to increasing diversity in the creative industries. Inside ‘Mini Grey’ children create a custom outdoor advert for KidZania, which appears on Clear Channel screens around the ‘City’, as well as get a taste for working in the business.

Running alongside the TV and cinema, the campaign also features radio and outdoor, and a series of illustrations by tiny Art Directors (aged 5 -10 years old) briefed to draw the job of their dreams for print. Cross-over occupations such as a ‘Firefighting Hairdresser’ and a ‘Chocolate-Making Racing Car Mechanic’ demonstrates both children’s wild imagination, but also a curiosity in trialling various career paths.

Clemmie Telford, Creative Director at Grey London, says: “KidZania is a joy to work on.  It gives us the opportunity to empower kids to shape our advertising and, better still, play a small part in shaping the next generation’s career choices. After all, these kids are going to run the world one day.”

Hannah Walker, Head of Marketing at KidZania London, adds: “Working with Grey London we have been able to bring KidZania to life through the eyes of our most important critic – the children. KidZania is a City where the kids are in charge so it is only natural that they should be empowered to lead in our advertising campaign. It’s their designs, their script, and their future aspirations. KidZania enables children to learn essential life skills, alongside freedom for creativity, imagination and most importantly fun.”

Most of all it gives Generation Z the chance to try on the world they’ll one day inherit.