The 'IVF Made Human' campaign is dedicated to revolutionising fertility science, the brand Is rapidly expanding throughout New York 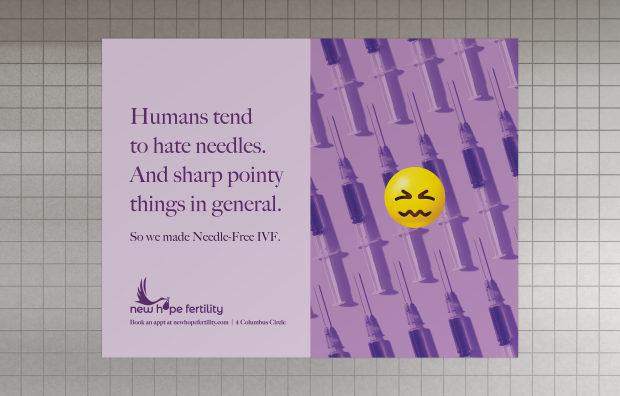 New Hope Fertility Centre, a cutting-edge provider of the full range of IVF services, announced the launch of its first integrated brand campaign to help fuel its growth across the New York market.

Created by independent, full-service advertising agency Terri & Sandy, the campaign seeks to humanise IVF, recognising that women seeking IVF treatments often feel like science experiments after being endlessly poked and prodded. With the tagline “IVF Made Human,” the campaign highlights the unique approach taken by New Hope, which has pushed the boundaries of fertility science to pioneer highly effective, less-invasive treatments, such as Needle-Free IVF, Mini-IVF with fewer hormones, and At-Home IVF procedures.

“We wanted to bring a more human tone to the IVF discussion, as the process itself often makes people feel quite the opposite, and that’s something New Hope is striving to change,” said Sandy Greenberg, co-CEO of Terri & Sandy. “The campaign, bold and graphic, leverages emojis to make it more relatable, and to capture the roller coaster of emotions women experience when their bodies are subjected to a multitude of hormones, shot after shot, and the exhaustive process of racing to the doctor every day for treatments.”

The centrepiece of the work is a takeover of the Columbus Circle subway station (across from New Hope’s flagship location and near many other fertility centres), encompassing digital billboards, walls, turnstiles, and stairs, which will be live until the end of October. Additionally, the campaign will come to life across Facebook, Instagram and search.