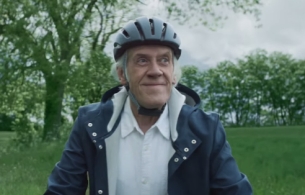 Halfords' new summer TV ad evokes the freedom of childhood fun and escapism that riding a bike brings – and urges parents and children to “get that feeling”.

Launching this Saturday, 13 June on ITV1, the UK’s biggest bike retailer is following its nostalgic “Nothing Beats a Bike” Christmas ad by showing adults how to unleash the joy of cycling by tapping into childhood memories.

The 30-second spot shows an older man rediscovering the childlike thrill of riding a bike by freewheeling down a hill in the countryside during a very British summer, as we see him transform into versions of his younger self and relive memories of past summers on his bike.

Halfords Marketing Director, Karen Bellairs said “The ad captures the feeling of free-wheeling fun that we believe everyone can enjoy when they ride a bike, at any age. This isn’t about winning the race, but enjoying the journey.

“We want to encourage kids, big and small, to rediscover a love of cycling and unlock memories of great British summers out on their bikes, whatever the weather.

“We’re building on the momentum created by our best-ever Christmas bike sales and the shared excitement around cycling predicted this summer.”

The ad was created by Mother and directed by Noam Murro (300: Rise of an Empire) through Biscuit Filmworks and was shot over two days on location in the Buckinghamshire countryside.

The action is set to the iconic score “Raindrops Keep Falling On My Head” recorded by Ray Conniff – the Oscar-winning soundtrack to Butch Cassidy & the Sundance Kid, released in the summer of 1969 and remembered for the playful scene in which Butch (Paul Newman) shows off his bike skills.

Over 400 actors were cast to find the final four to play the bike-loving character at the different stages of his life, with no prosthetics or CGI used.

Due to launch on ITV1 on Saturday, 13 June during The Hobbit’s terrestrial TV premiere, the £1million media campaign, created by newly appointed Carat Manchester, will air across primetime family viewing throughout the summer, in a bid to remind people of all ages of the timeless joy of riding a bike.