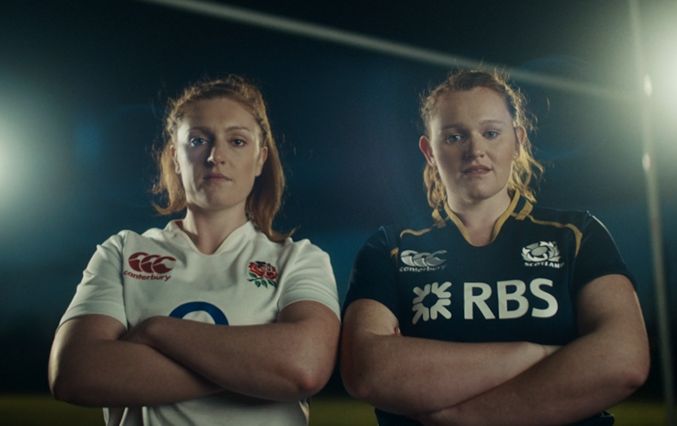 A new Guinness film, following a story of rivalry and sisterhood between two rugby playing sisters on opposing national teams, has launched. The new ad from AMV BBDO marks Guinness stepping in as the first official partner of the Women’s Six Nations in 2019.

‘Sisters’ tells the real-life story of two rugby players and sisters, Harriet and Bridget Millar-Mills who, having learnt to play rugby together in their childhood years, succeeded in playing for opposing England and Scotland national teams, going head-to-head in the 2013 Women’s Six Nations championship.

The 30-second film directed by Tubby Brother champions women’s rugby and the rivalry of sisters Harriet and Bridget, who star in the ad themselves, captured playing against each other in their adult years for the 2013 Women’s Six Nations – rivals on the pitch, sisters off the pitch.

‘Sisters’ is the latest GUINNESS advert from the ‘Made of More’ series and is the latest rugby ad from the brand, following the launch of ‘The Purse’ earlier in the Championship. Previous Guinness rugby ads from ‘Shane Williams’ (2014) to ‘Gareth Thomas’ (2015) have focused on players of character from the men’s national teams, while ‘Sisters’ is the first advert from the brand championing players from the women’s game.

Niall McKee, head of GUINNESS Europe said: “We are proud to launch the new ad ‘Sisters’ which celebrates the rivalry of two sisters in a unique situation, playing for opposing national teams.. Harriet and Bridget have both had exceptional careers in rugby and no doubt the greatest experience was representing their country against each other in the 2013 Women’s Six Nations. We’re proud to be able to tell their story, especially in our first year as Official Partner of Women’s Six Nations.”

Sisters Harriet and Bridget said: “When we started playing the sport, we never expected to be lining up for opposing national teams. Although we’re rivals on the pitch and there has always been a competitive edge, we are sisters first and foremost and that friendship between us has always motivated us to be the best we can be at the game.”

The new Guinness partnership with the Women’s Six Nation’s championship cements the brand’s position as one of the game’s biggest supporters. As part of the partnership, Guinness has delivered on raising the profile of the championship by improving the player and fan experience on game days, alongside running the official Women’s Six Nations Pitchside Pundit at a number of games throughout the Championship.