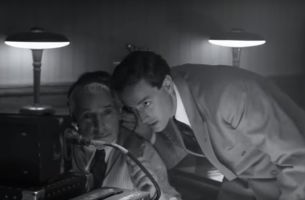 AMV BBDO and Irish International have created a new ad for Guinness, “John Hammond, Intolerant Champion”, which celebrates those who have the confidence to carve their own path. The film breaks online on 1st Feb, and on TV on 3rd Feb, and it will run on TV, online (YouTube, online media TV, Facebook, Twitter, Instagram) and in cinemas.

The ad, which is filmed entirely in black and white, transports viewers back to 1930s New York and tells the story of John Hammond - a man born in turn-of-the-century Manhattan, when racial disharmony prevailed. Black and white musicians rarely played together in ‘30s New York and many music venues permitted white audiences only. Despite this, from an early age John Hammond developed a burning passion for music of black origin – Jazz, The Blues, Big Band and Gospel. He would travel the clubs and bars of Harlem seeking raw, undiscovered musical talent for his radio show and he would often be the only white man in the room.

Undeterred, he went on to become a remarkable talent scout and was responsible for discovering musicians like Billie Holiday, Count Basie and Aretha Franklin. He signed them to Columbia Records, giving them an incredible platform to be heard – not only by black audiences, but by music lovers across America and the world over.

Hammond stood almost alone in championing the potential of black and white musicians working together – and fighting this cause gave him a platform to make a difference. In his memoirs he reflects, "I heard no colour line in the music…". Hammond described himself as, “the sometimes intolerant champion of tolerance”. Others described him simply as, “the world’s greatest talent scout”. He went on to sign legends like Bob Dylan and Bruce Springsteen to Columbia, but it was his pivotal role in bringing together black and white musicians that is his most lasting legacy.

With voiceover by Danny Glover, US actor, producer and humanitarian, the ad offers viewers a window into the world of Hammond. Dazzling scenes from across the city show music lovers of all backgrounds, united together, enjoying and celebrating the great sounds playing out over the airwaves.

Guinness has never been afraid to make bold decisions whether pushing the boundaries in brewing great beer, innovation, or celebrating those who are Made Of More. Stephen O’Kelly, Marketing Director, Guinness said, “‘John Hammond’ continues a series of stories from GUINNESS that feature an ordinary people achieving extraordinary things. John Hammond, in his search for great music, brought black and white musicians together, over-coming divides and creating a fantastic music and social legacy that continues to this day.”

The music in the ad is a remix of ‘Sing Sing Sing’ from the Swings Kids film score by James Horner. The song was originally made famous by the Benny Goodman Trio – the first major mixed race band in America. Hammond was instrumental in bringing the band members together.

Grammy nominated Lianne La Havas, who features in the ad, has referenced Hammond artists such as Aretha Franklin, Billie Holiday and Bob Dylan as influences on her music.

The ad was directed by Jake Nava, a top music video and film director, whose portfolio includes videos for Adele, Beyoncé and Artic Monkeys. Director, Jake Nava said, “It’s fair to say that John Hammond is an unsung hero and his lasting legacy on the world of music is a story that has been largely untold. It is wonderful to have the opportunity to tell an aspect of it in a way that I believe authentically captures the significance of what he achieved.”

The Director of Photography was Dion Beebe, an award-winning Cinematographer for Memoirs of a Geisha, Chicago, and Collateral.

The ad and accompanying historical documentary will be supported with a TTL campaign in TV, digital, social and PR. The campaign sees Guinness launch using a social first approach to encourage organic share-ability, utilising some of the industry’s most innovative social media formats.

The brand has worked closely with Instagram to incorporate the latest technology in the John Hammond ad amplification plans and will be the first brand to launch 60” video on Instagram in GB and Ireland. Amy Cole Head of Brand Development for EMEA, Instagram, said:

"Guinness is known for being at the cutting-edge of advertising and for its creative and iconic visual storytelling. That's why we're thrilled that Guinness is the first brand to run a 60 second video on Instagram in the UK and Ireland.

"People and businesses come to Instagram to find inspiration. With nearly half of Instagrammers following a brand, it's never been more important for advertisers to have the tools and creative flexibility to tell their story with imagery – whether through landscape ad formats, multi-image placements or various video lengths. With our new 60" ad format, Guinness will be able to further amplify their beautifully shot hero creative."

Guinness celebrates John Hammond, a record producer and talent scout who played a pivotal role in bringing together black and white musicians in the 1930s, all for the love of great jazz.

The John Hammond campaign continues the Made of More positioning for Guinness which continues to celebrate people who have the confidence to carve their own path. It launches on 1st Feb and will run for 8 weeks.