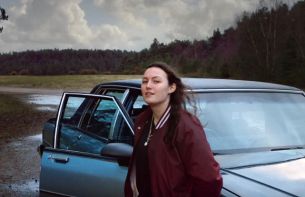 This weekend, giffgaff’s 2018 brand campaign will launch with a striking 60-second film created in collaboration with Rattling Stick’s Ed Morris.

The single-shot film is beautiful in its simplicity. A young woman stood in front of a parked car in a nondescript setting delivers a thought-provoking monologue exploring the advantages of ‘small’ and challenging the conventional idea that ‘big’ is always better. The camera slowly zooms towards the simply-dressed protagonist as Siouxsie & The Banshees’ 1978 classic ‘Hong Kong Garden’ gradually becomes more audible.

Tom Evans and Olly Courtney came up with the initial concept of ‘Small vs Big’. Ed Morris conceived the idea, wrote the script and directed the commercial and shot the stills campaign.

giffgaff’s core values are built around freedom from restrictive contracts and the support provided by its community of users. It’s a brand which has regularly challenged the dominance of the big players in the mobile market by providing an alternative model. This latest piece of communication is no exception and the combination of talent on both sides of the camera has created a film which emphasises the brand’s unconventional positioning.

Tom Rainsford, Brand Director giffgaff, comments: “All you have to do is turn on your TV or go online and you hear big men shouting about big things, in a big way - when all it really is, is a big bit of old noise. We wanted to present a different point of view. We wanted to make something that was bold but in a small way.”

Rattling Stick's Ed Morris said: "It's been a pleasure working closely and quickly with such a supportive and contributive team. I think that pleasure shows in the work."

The film will air during the final of The Voice on Saturday 7th April, underlining giffgaff’s connection to the ITV programme which they have sponsored throughout its 2018 run.   The film will be supported by social and OOH.