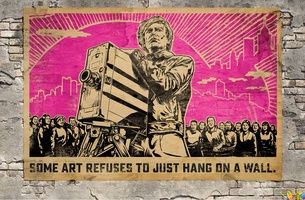 To promote the new Andy Warhol | Ai Weiwei exhibition at The Andy Warhol Museum, MARC USA is creating a multi-platform campaign that leverages the bold, pop and propagandistic style used by both artists in video installations and posters seen in Times Square in New York City, in a subway station and airport takeover in Pittsburgh and across a range of other out-of-home and print executions.

The graphic style of the promotional images borrows from traditional Chinese Socialist Realism posters. The ads feature large-scale pen and ink drawings of each artist in profile, with Warhol against a pink background and Ai against a blue background. One drawing features Warhol wielding a classic box camera and in another Ai raising his middle finger in protest, referencing one of his most iconic works, Study in Perspective. A 12-screen Times Square installation, donated by American Eagle Outfitters, includes a time-lapse video as well as Warhol and Ai images illustrated to promote the show.

Andy Warhol | Ai Weiwei was developed by The Warhol and the National Gallery of Victoria, Melbourne, with Ai’s participation. It spans the seven floors of The Warhol with more than 350 works that explore the influence of both artists on modern and contemporary life and the parallels between their work.

“Both Andy Warhol and Ai Weiwei are activists as well as artists, changing our understanding of the world,” noted Eric Shiner, The Warhol’s director. “Through drawing, film, new media, photography, painting, sculpture, publishing and more, both artists bring into question what art can and should be and engage in political messaging and social activism.”

Michele Fabrizi, President and CEO of MARC USA and Chairman of the Board of The Warhol added, “The Warhol continues to bring breakthrough exhibitions to not only our region but also the nation. When seen on the streets, the ad campaign celebrates the artists and highlights the themes of the exhibition.”