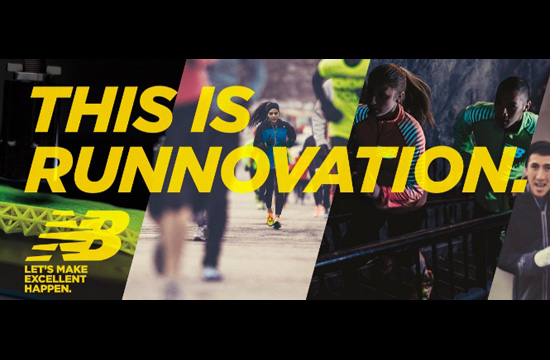 Global athletic leader New Balance, together with global creative agency of record Arnold Worldwide, have unveiled a new brand campaign that documents real people, who are redefining, the current state and future of running. The fully-integrated campaign introduces a new word, “Runnovation” which reflects New Balance’s long-standing commitment to innovation and evolution around the sport of running.

New Balance defines “Runnovation” as a noun “The act of running evolving from Boston to the Canary Islands, from the science lab to the city streets. Running is getting more social, interesting and more unpredictable”. To use it in a sentence “Runnovation is evolving fast, and New Balance is pushing the pace. This is Runnovation”. The campaign ties back to the “Let’s Make Excellent Happen” campaign that launched in 2011 but is an update that highlights new interpretations within running. 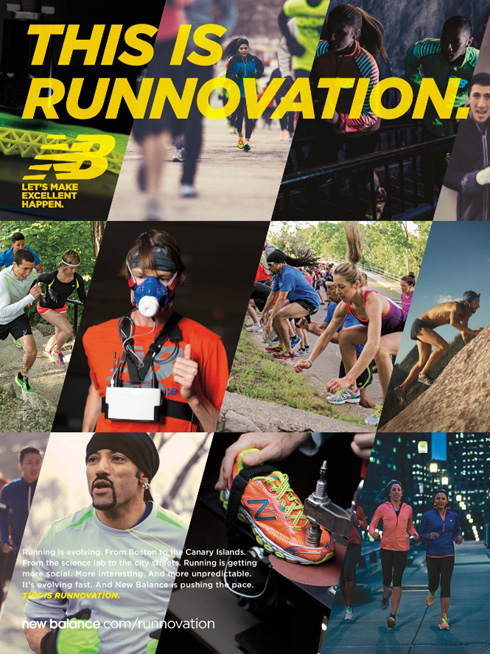 Including print and digital advertising, viral video, online interactive content, in-store and event consumer experiences, the campaign launched in the U.S. on July 9th with a compilation print ad in the August issue of Runner’s World Magazine.  Highlighting Team New Balance's elite athletes, as well as real everyday people pushing their limits of performance in the pursuit of achieving excellence.

The campaign will focus on Runnovation through three different storylines – one how running is evolving into a more social and participatory sport by focusing on a grassroots training group, November Project. The second highlights how athletes today are challenging the limits of the sport through Team New Balance Athlete Anton Krupicka, two time winner of the Leadville 100 Race. The third looks at the latest in innovative technologies that continue to revolutionize running from a product and design standpoint through the Innovation Studio at New Balance’s Lawrence, MA office.

Print and digital advertisements with run in Men’s Health, Women’s Health, Men’s Journal, Outside, Running Times, Women’s Running, Competitor and New England Runner magazines. Branded digital videos will launch on  www.newbalance.com and the New Balance YouTube channel from July 15th. These will feature interactive overlays that explain to viewers what product is being shown and will directly tie back to the brand’s online retail store. The campaign will come to life inside New Balance shops by defining “Runnovation”, showcasing social media content in the store windows and will invite consumers to join in the movement by listing a variety of upcoming local races and fun runs. “Runnovation” will further come to life at the New Balance Falmouth Road Race, Disney Wine and Dine Half Marathon and other sponsored events.