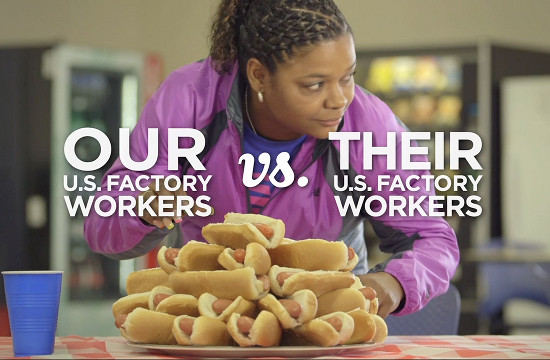 New Balance is premiering a humorous and challenging four video series called "Our U.S. Factory Workers vs. Their U.S. Factory Workers”  on NewBalance.com and the New Balance YouTube channel. Part of the fully integrated campaign "America is for the Makers,” these videos are complementary to the "Join Us" print ads that ran in The New York Times and Wall Street Journal, enticing their competitors, as well as all companies, to move manufacturing back to the US in recognition that making things here matters.

Created in partnership by Arnold Worldwide, these initiatives were developed to celebrate New Balance’s unique history, the quality products created in their domestic factories and the people who work there.  As a global athletic leader, New Balance has been manufacturing shoes continuously in the U.S. for more than 75 years and today is the only major company still producing athletic footwear in America. Their commitment to domestic manufacturing employs 1,300 highly skilled craftsmen at their five New England manufacturing facilities, where one in every four pairs of shoes New Balance sellsin the U.S. is made or assembled.