Partizan's Grady Hall teams with ArsenalCreative for a musical masterpiece 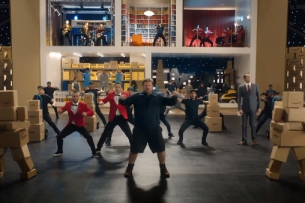 Amazon Prime has more to offer beyond 2-day shipping, and to help familiarize users with their alternative offerings, Amazon enlisted the help of the visual effects masters at ArsenalCreative. The e-commerce giant recently debuted a catchy musical theatre parody “Prime Musical,” to announce additional Prime streaming services. Headlined by actor Casey Campbell, the 60 second extravaganza features a full cast of performers and backups, sweeping set changes, and choreography by So You Think You Can Dance’s Mandy Moore.

The theatrical spot contains a number of digital components that seamlessly integrate into the environment more prominently the CG drones and conveyor belt. In order to achieve such accuracy in post, ArsenalCreative assisted in the initial design and concept of the spot and worked closely alongside camera crews and the art department during the production process.

Using a variety of visual effects techniques and tools, the studio was also able to create Amazon’s trademark marquee. Maya was used to design the final set layout with extensions, conveyor belts, and drones. To make the drones as realistic as possible, ArsenalCreative created 3D models. This was done by using some on-set scanned data which was then imported into Maya and ZBrush. They were then shaded and lit in V-Ray, creating a photorealistic render that could be composited with the live-action in Nuke.

“It was the largest live-action production Amazon ever did and the stakes were high in a relatively quick turnaround,” notes ECD Kaan Atilla. “Working with the creative team directly at Amazon provided us a collaborative environment where our team of artists supervised, designed and built each scene for a seamless experience in each version of the choreographed piece.”