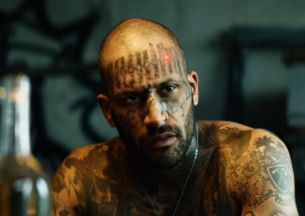 Produced by La Pac Paris, the live action film 'The Red Dot' is set in a Bolivian drug trafficker's hideout, where we are introduced to some unsavoury characters and a rather curious cat. The eponymous 'red dot' begins to scan the room, causing the playful cat to chase it around.  A hail of bullets reveals the red dot to belong to a sniper's laser sight, as the drug dealers are dispatched in an efficient - and bloody - manner.