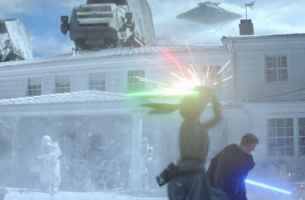 This holiday season, Duracell powers children’s imagination and inspires them to enter the Star Wars world.  Duracell is helping parents encourage creative and imaginative play with their children, in a world where screens and video games are becoming more prevalent.

Duracell used the same cinematographer, Daniel Mindel, and equipment to shoot the film, including a new anamorphic camera lens and aspect ratio only used previously on Star Wars: The Force Awakens.Duracell encourages parents everywhere to give Star Wars toys this holiday season to Toys for Tots, so that every child can experience the joy of imagination in the Star Wars world.  To match this effort, Duracell will be donating 1 million batteries to Toys for Tots to power imagination this holiday season.

As a major promotional partner of the new Star Wars film, Duracell is powering imaginations as the official battery power behind the all-new Star Wars licensed products including lightsabers and Battle Action Millennium Falcon.