Neuer & Ozil Unleash Their Inner Warriors for the World Cup 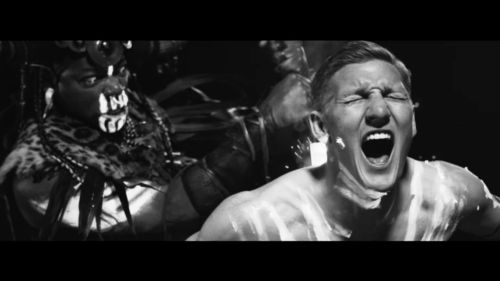 The dramatic online spot, shot entirely in black and white, displays the ‘inner personas’ of some of Germany’s most famous football players; Schweinsteiger appears as a tribal warrior absorbed in an intense battle ritual, Muller’s inner cheetah displays his strength and speed, Neuer erupts into a samurai surrounding the goal and finally we see Ozil, a knight in shining armor ready for the game, his helmet morphing into a football as it hits the pitch. The film aims to highlight each player’s skills and true identity by stylizing their own trademarks.

Every frame of this film was enhanced in Nuke, wherein the team created a set of shadows, shapes, de-focusing effects, camera movements, flares, subliminal frames, superimposed imagery, smoke, flames, particles and CGI elements such as balls, which were then all composited together, maximizing the already dramatic effect of the black and white set that was shot.

Lead 2D artist Hugo Guerra comments, “The first time I saw the treatment for Adidas ‘Battlepack’ I knew we were set to be involved in a very special project. The concept is creative and incredibly strong and really pushes the boundaries of what is expected from a typical World Cup commercial.

The Mill was involved throughout the project from the shoot to the final polish of the grade, completed by James Bamford. It was a real pleasure to work with such a creative director as William Armstrong, we’re incredibly pleased with the final result, which really packs a punch and I can’t wait to collaborate with him again.”