New album from the Manners McDade artist is out today 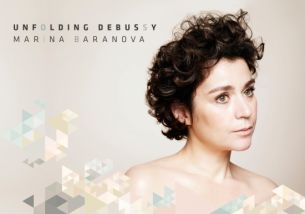 To mark the occasion of Claude Debussy’s 100th anniversary, Marina Baranova has created Unfolding Debussy. Released via the Neue Meister label, “It’s for people who are open-minded and already in love with classical music, but also for people who don’t know anything about it,” she says. Nearly a hundred years after his death, Unfolding Debussy hopes to inspire a new generation of music lovers, and ensure that his sensory majesty is not lost to the drifting sands of time.

With Unfolding Debussy, Baranova has created so much more than a simple homage to one of the greatest composers of the 19th and 20th Centuries. Since Marina Baranova first played Clair de Lune as an eager nine-year-old, a question had stayed with her: Was there another side to Debussy’s music, one influenced by his turbulent private life and tempestuous relationships? “You have this creation that has perfect form, but I was always interested in exploring the folds and the cracks; in looking inside, to see how it works. So I decided to unfold the music to discover these deeper meanings.”

To emulate the richness of Debussy’s original compositions, Baranova sought a broader palette and different textures. “Every instrument has its own colour,” she says, and so a number of different pianos and keyboards were employed to help to weave her magic. An Una Corda, a Fender Rhodes, midi keyboards and a C. Bechstein grand piano.

Nearly a hundred years after his death, Unfolding Debussy hopes to inspire a new generation of music lovers and ensure that his sensory majesty is not lost to the drifting sands of time. Even after allt his time, the cultural titan can still conjure a million colours in the mind.

The Neue Meister label dedicates itself to the young generation of composers. Since its start-up in January 2016, it's embraced diversity with a steadily growing roster of international artists. Their sound spectrum ranges from minimal piano to electric trio, from orchestral to choral.

Watch the excerpts from Maria's performance of 'Clair de Lune' below.