Damien reveals his inspiration behind the making of his new album 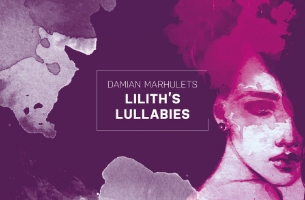 For Damian Marhulets his interest in this musical form stems from the birth of his daughter, a moment he felt would always arrive. “I’ve had this strange premonition since I was a teenager that I would be a father and have a daughter…I always knew it was going to happen,” he explains. And yet when it did, it changed him profoundly – and musically – in ways he’d never imagined.

“I realised there are musical pieces which are very important to my child and my relationship with her, pieces that are not to get her to sleep but to help her wake.

So I started thinking about the concept of the lullaby, which is a threshold song; a song to help you to get to the other side of your consciousness.” And thus the seed for his dreamy, immersive new album, Lilith’s Lullabies, was sown.

“There used to be no connection between my personal life and the music I made but this changed two years ago, and I needed a new way to express this,” he explains. That change was becoming a father and getting married, the latter something he “was never interested in. I wanted to be an artist and be free, and roots are evil if you are serious about making art.” Nevertheless, he took the plunge; together with the birth of his daughter and the sad, untimely passing of his father, it led to “a whole series of very personal and emotional experiences” that he poured into new music, songs that would eventually form the core of Lilith’s Lullabies.

In Jewish mythology, Lilith is the mother of all demons, a child murdering, sexually wanton monster who prowls through the night. Yet she became an important social and political symbol for radical feminists in the 1960s, and a totem of female strength and independence. Marhulets wanted to probe these opposing meanings and how such a symbol evolved through time, but he discovered a linguistic quirk that compelled him to write a suite of songs in her honour.

They’re all transformative, taking the listener on a journey that fully explores that “other side of your consciousness.” Some songs really are lullabies, beautifully flowing odes that caress your brain and ease the senses. Others have a brightness and energy that’s impossible to resist. Together, they make Lilith’s Lullabies a thoughtful, contemplative listen, and mark a new chapter in the rise of one of the most talented contemporary composers currently at work.