'BachSpace' is now available on iTunes, Spotify and Amazon Music 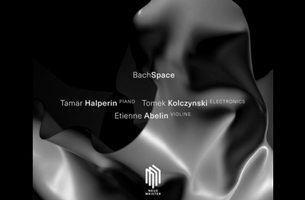 The album, which was released on the 22nd of September, organises famous violin and keyboard sonatas by Johann Sebastian Bach into electronic compositions to create new entities. This technique, which was referred to as a "pasticcio" in the Baroque era, lends the themes and motifs of Bach's music a contemporary dimension.

The record includes four hybrid works; "Vintage Moon", "Electric Rain", "Hiraeth" and "999” named constellations as a nod to the creation of meaningful patterns of disparate entities. The beauty of the album is in the way Bach’s melodies and harmonic sequences are reinterpreted with traditional instruments and modern music technology, allowing the listener to immerse themselves in a unique symbiosis of electronic and organic sounds.

The album release concert will be held on the 29th of September in Bar du Nord, Basel, Switzerland.