Neil DeGrasse Tyson on Why Science Needs a Marketing Strategy 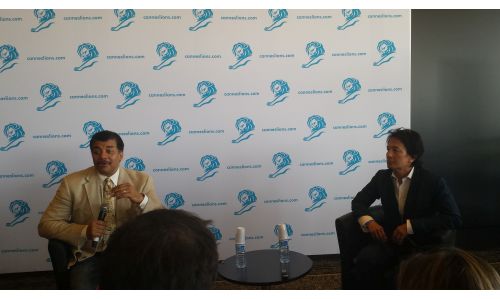 With the growth of data-driven advertising and the infiltration of tech brands and innovators to festivals like Cannes, the creative industries’ flirtation with science is blossoming from steamy affair to wedding bells. But the conversation to date has been a largely pragmatic discussion, focused on practical applications. Things took a rather romantically philosophical turn this afternoon in Cannes when physicist and science communicator Neil deGrasse Tyson took to the stage with Ogilvy & Mather’s Global CCO Tham Khai Meng to discuss the creativity of science and the surprising similarity between artists and scientists.

For Tyson, art and science can be seen as opposite faces of the same coin, feeding into each other and inextricably linked. “You know the phrase ‘he’s got it down to a science’? You’ve heard that right? But what’s the flip side of that? He’s raised it to an art. Those two phrases are kindred souls in the exploration of making something great. There’s no other two fields that exist in sentences such as those,” he said.

Meanwhile Khai was keen to point out the insatiably curious mindset common to both creatives and scientists keen to explore the mysteries of our existence. “I think we are all on that search. And I think we will be together one day. We are hiring people in the science field into advertising, we’re hiring cartographers, map makers, all kinds of storytellers. We have an eternal pursuit of knowledge. It’s natural, steeped in our civilisation. How do you get to these ideas? You trawl everywhere, like these guys who are always trawling the universe for stars and planets. It’s very much alike.” 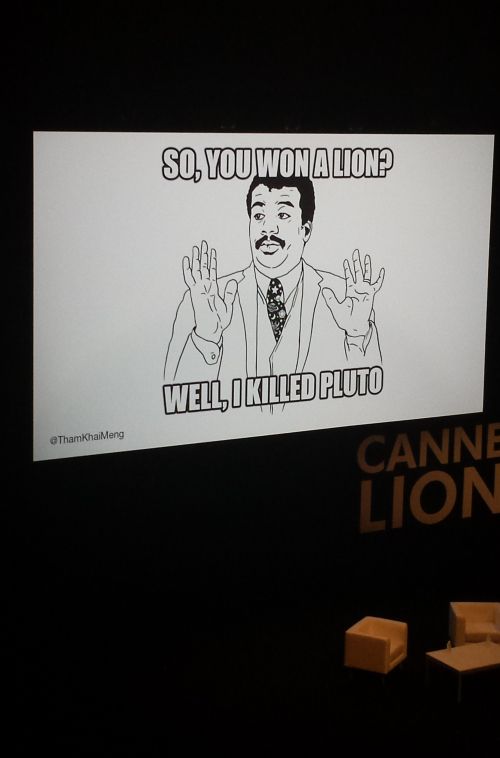 In a wide-ranging discussion that covered everything from the purity of spheres to the ‘loop-the-loop’ journey that the earth takes to orbit the sun, one of Tyson’s central messages was that of the role of the artist in the promotion and elevation of science. “When something becomes the purview of the artist, by my reading of the history of civilisation and culture, if the artist is touching it, you are in the culture,” he said. “I’ll put out a tweet about one thing or another, they’re just my random thoughts, and artists make wild designs out of it, they create an innovative new way to tell that story. I’ve realised that we’re all becoming participants in cosmic discovery. Everyone doesn’t have to be a STEM professional to embrace what the STEM professions are. When the Hubble telescope was going to have its budget cut, the loudest supporters were the general public because their screensavers were Hubble images. They wanted to touch the universe. It was in our culture. And when I see creativity that everyone else brings to some of the fruits and biscuits of cosmic discover, I just smile and think ‘this is a beautiful thing’ because now we are all basking in the moving frontier of cosmic discovery.”

And while much has been made of the impact of data science, neuroscience and technology on the advertising industry, Neil deGrasse Tyson thinks that the sciences have much to learn from marketing and creatives.

“In my field, in the 20th century, during the Cold War, governments understood the value of the work that physical scientists would conduct in the interest of national security, so they didn’t need a marketing plan. It was well understood and established. What is the expertise of the physicist? They are specialists in matter, motion, energy and the interplay of these three elements. And that’s what society wants, what the military wants and so it didn’t’ require it. What happens after the cold war and the wall came down in 1989, all of a sudden science got viewed as a luxury activity of a wealthy society rather than the fundamental activity of a civilised nation,” he said.

“I’ve been a proponent of alerting people to the value of discovery because investments – again my bias is that I think about science and math STEM fields - in those fields can transform a complacent country into an innovation nation, if you have great goals set before you. Then the entire culture thinks that way and it spreads in all ways and new ideas matter. In modern times it looks like science needs some marketing. I wish that wasn’t the case but marketing, as I see it, is an investment in the future of all countries.”