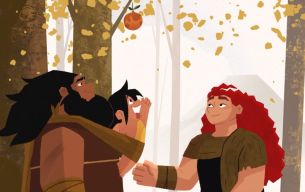 Publicis Conseil (Paris) and BBH (London) have created a new campaign for Nestle baby food brand NaturNes, celebrating the best that nature has to offer and introducing us to the adorable First Family.

The organic baby food market has seen an increase in sales by 26%*. Nestle recognised that in this crowded market, its NaturNes range needed to inspire parents with a fresh and differentiated point of view.

BBH London identified that parents believe feeding their baby is one of the most caring and involved acts of parenting, and yet baby food advertising seemed forever fixed on the child’s viewpoint.

Switching that focus, and letting parents know that the NaturNes products understood their side of the story, the brand’s new positioning identifies that parents already know instinctively how they want to, and choose to, raise their child. NaturNes encourages parents to do the best and give the best for their child with products made by harnessing the best of what nature creates.

The animated campaign film ‘First Family’ reminds parents of their own natural instincts, by tracing all the way back to the very first family, and recounting all the lessons they learned along the way to being parents; all the way up to a modern-day couple, with their first child.

With its upbeat classic soul soundtrack, the film feels authentic while also being nostalgic with a visual style of storytelling familiar to parents. Using 2D animation, rather than an artificial 3D style, the campaign also boasts a natural handmade feel and quality; again, reinforcing the sense of “natural” at the heart of it.

“At NatureNes, we believe parents always want the best for their little ones – including the best food for their baby. Nothing should stand in the way of that natural instinct. That’s why our beautifully crafted First Family film reminds parents that whatever feels right is the best way to care for your baby. We believe that being organic is not enough, that’s why we go beyond, with food specially tailored for babies in our Baby Organic range”.

"How often can you bring the world of parenting and Paleolithic humans together in one ad? Not often, is how. But what better way to remind parents they already know what they're doing, than a shout out to the first parents who gave us all that we instinctively know.”

The film has already launched in Greece, and will be launching in Spain and Portugal on 27th September, and in the Nordics on 26th October.