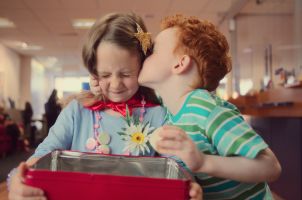 Friday saw the launch of the next stage of Nationwide’s brand story, which demonstrates the benefits of the mutual model in delivering long term value to its 15 million members and customers.

The campaign, which was created by VCCP and VCCP Kin, with media buying and planning through Havas Media, centres around the tagline, ‘Life’s better when we share’, drawing on the brand’s commitment to share the mutual benefits of membership through the continued support of the ‘Recommend a Friend’ initiative.

Launching during C4’s Gogglebox on Friday 10th June, the advert follows the story of a little girl who spends her pocket money on cakes at a market stall. Instead of keeping them to herself, she shares her cakes with different people she meets. It follows her journey around the market as she learns that the more she gives, the more she gets back in return; ‘life’s better when we share.’

With Recommend a Friend, Nationwide current account holders can share £200 with a friend or family member if they switch current accounts, following their recommendation. This initiative, alongside the Current Account Switching Guarantee (which lets customers move their current account within 7 working days) means it has never been easier to switch.

Recommend a Friend has already proved popular with Nationwide members and the Society continues to be a net gainer in the current account switching market. Nationwide has grown its current account market share during the last 12 months to 7.1%, opening over half a million new current accounts (525,000).