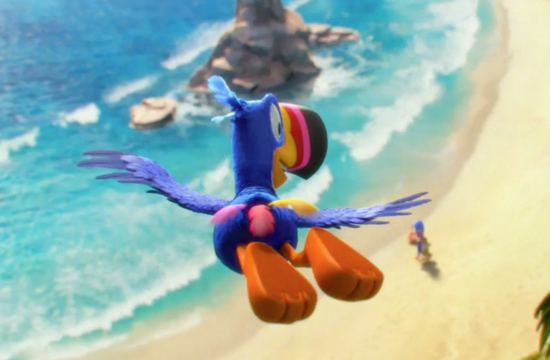 Toucan Sam and his trio of boisterous nephews return for their 3D encore in a wave-crashing, treasure-hunting tale of a spot from the animation and design gurus at Nathan Love. Introducing the all-new Kellogg’s® Froot Loops® Treasures™ with strawberry-flavored filling, Froot Detector marks Nathan Love’s second outing for the brand, following a stunning debut that shepherded the iconic avian characters from five decades of 2D familiarity to contemporary high-quality 3D. The animation studio took care of layout, animation, modeling/texturing, lighting/rendering, effects and composting on the lively spot.

“Leo Burnett and Kellogg challenged us to find creative ways to visually reinforce these new strawberry-flavored treasures throughout the spot,” explains Nathan Love Creative Director Joe Burrascano. “Our solution was the concept of an oversized strawberry jungle. One of our goals with this ongoing Froot Loops campaign is to create a continuous sense of wonder and ignite kids imaginations, and with each spot we try to develop fantastic worlds for our heroes to explore. Strawberry cove was just the latest of these worlds.”

The imagery is filled with thoughtful touches that will both build the personalities of each character over the long term and appeal to Froot Loops’ target audience. The shortest nephew, for example, is the mastermind of the group, and he creates a “froot detector” to locate the strawberry treasures beneath the sand. The detector, however, is an imaginative contraption cobbled together from Froot Loops, heater coils, art supplies and an old toaster.

Nathan Love built off its experience from constructing the brand’s 3D debut, improving upon every element: cinematography, effects and storytelling devices. The artists, in particular, benefitted from this familiarity, delivering a major upgrade to the look and feel of the hero characters, decking them out with detailed and realistic feathers, shiny new beaks and fancy new feet. The experience built from the past campaign also considerably streamlined the production pipeline, making for a snappier delivery and smoother end-to-end workflow.

“The beauty of this campaign is the longevity that comes with it, and having a chance to really get to know our clients and build a strong relationship with them,” states Nathan Love Head of Production, Derrick Huang. “With every new spot, we can learn from the one that came before it and continuously improve on the quality and detail at every level. Our animators get deeper into the characters they bring to life – understanding their motivations, refining their idiosyncrasies, and mastering their performance. Inheriting such well-known and beloved characters comes as a great honor, so we do everything in our power to keep this great tradition alive.”

One special challenge entirely new to Froot Detector was the water effect, which appeared in almost every shot and had to look and act like a real body of water that interacted with the characters on cue. Nathan Love approached this obstacle by treating the wave like another, very complex character. Following several weeks of R&D, simulating natural wave currents, interaction with the shore, collisions against rocks, and acutely timed splashes, the animation team laid the groundwork for timing and basic wave shapes, then handed it to their effects guru to bring to life, who went so far as to alter the texture of the sand as the waves receded.