Names Not Numbers: Making the Fight For Women's Rights Personal 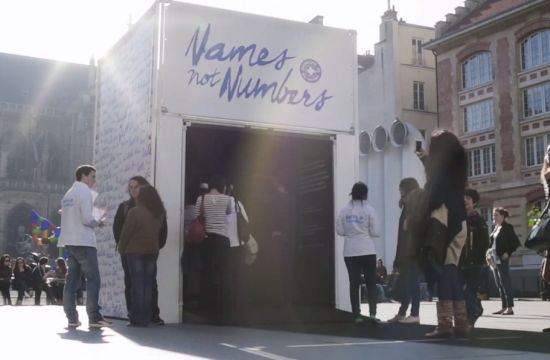 Over 300,000 women die every year due to pregnancy related complications and unsafe abortions.

As if that number isn't depressing enough, in the past year, as people in developing countries continued to fight for basic women's rights, many of those same rights came under fierce attack across Europe and the United States.

Doctors of the World, with their agency BETC Paris, set out to draw attention to this major problem. Instead of focusing on daunting statistics we wanted to get to the heart of the issue: each woman who dies from poor medical, hygienic, or political conditions.

With the help of B-Reel and We Do, BETC Paris created a machine that prints the names of the women who have died on a card. Each card is a pre-addressed postcard that you can take from the machine and mail to your local politician. But you only have one minute to claim a card before it is lost.

On March 8th, International Women's Day, the machine was placed near the Centre Pompidou in Paris. Over a thousand people claimed cards and sent them to Najat Vallaud-Belkacem, France's Minister of Women's Rights.

The team also created a digital version of the machine at names-not-numbers.org. Here you can claim a virtual card and send it via Facebook or Twitter to your local politician or Ban Ki-moon, the secretary general at the United Nations. They want to harness the power of social media to contact these leaders in a way they can't ignore.

In fact, shortly after BETC Paris launched the campaign, Najat Vallaud-Belkacem joined the campaign by tweeting her support for Names Not Numbers.

In the coming months the machine will be installed in major cities across Europe keeping the issue in the spotlight before the UN holds a special conference on women's rights in September 2014.

Medecins Du Monde want to get our message directly from the people to the politicians. They want our leaders to take concrete steps to secure women's reproductive rights around the world. They want everyone to see that these are real women and not just statistics.