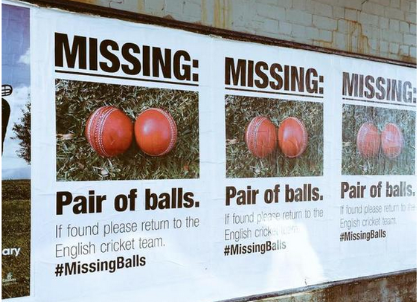 A campaign that got social media buzzing last week – as well as catching the attention of media worldwide – has been revealed as a collaboration between Sportsbet and Naked Communications.

In the lead up to the Cricket World Cup and Australia’s opening match against England at the MCG on Saturday, mysterious rock posters began appearing around Melbourne asking anyone who had seen a missing pair of balls (of the cricket variety, of course) to please return them to the English cricket team.

Later in the week, a billboard on Punt Road revealed the irreverent campaign was the work of Sportsbet, the Melbourne-based online betting giant with a history of creating mischief – but not before social media and media outlets worldwide had speculated about who might be responsible.

The cheeky little stunt generated over six million impressions via social media in just one week, and saw celebrities from Rodney Hogg to Jonathan Agnew and even competitor Ladbrokes call out the campaign on Twitter.

It also featured in global news outlets including The Daily Mail, The Mirror, BBC Sport and Metro UK, as well as locally on Channel 7, Channel 9, Fox Sports, in The Age, The Australian, The Daily Telegraph, and the Herald Sun.

Ken Robertson, head of brand & advertising at Sportsbet, said of the campaign: "You know a great idea when you see it and the pared back simplicity of this campaign was its brilliance. The unbranded street posters were absolute genius. In every possible way, this was a Naked campaign."

The campaign also saw the tongue-in-cheek posters appearing on helicopter banners in a fly-by of England’s training session on Friday, as well as on mobile billboards that were waiting for the England team as they left their hotel on the morning of the match, in which Australia smashed England by 111 runs.

Carlos Furnari, creative director at Naked Communications Melbourne, said: “Sometimes in advertising we tend to over think things, but in the best possible way, this is not one of those occasions. Lighthearted real world communications that the general public embrace and voluntarily spread through social — feels like a win to me.”

Tom Ward, managing director of Naked Communications Melbourne, said: “At Naked, we’re all about creative ideas that leave a dent in culture – and with the impact this idea has had this past week, we think it's a perfect example of that philosophy at work. We’d love to hear from any marketers out there who are interested in developing more work with balls with us."