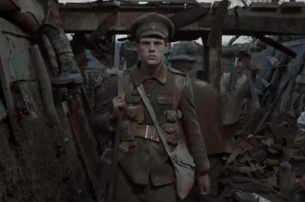 Three, a mobile operator in Sweden, has unveil its single biggest film to date. The 90-second film called “True Love” tells the story of a young English man’s desperate journey to find his French love in the early days of World War I – from the streets of London to the French countryside via the trenches of the Western front, it’s a story that spans over a hundred years.

Created by Swedish ad agency INGO, the film resembles a mini feature movie rather than a conventional ad. “The story takes place during World War I, but more than anything it’s a story about love that happens to take place in 1914,” says Bjorn Stahl, executive creative director at INGO.

“Because we are the challenger on the Swedish mobile market we need to tell our story in a more captivating way to make a point,” says Kalle Eliason, marketing director of 3 Business. “This stunning love story reflects our commitment to our customers to simplify their communications.”

“We’ve taken a detailed and historic approach to production and design, and the result is a film that’s worth watching several times,” says Bjorn Stahl.

The film will run heavily as 90-second spots on primetime Swedish TV and digital channels.