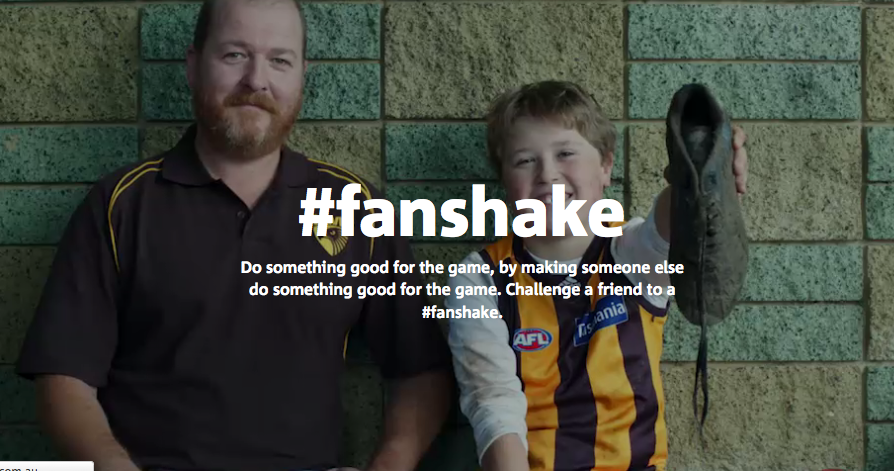 Fanshake encourages AFL fans to shake hands and put their pride and team loyalty on the line for the greater good of the game during the 2015 season. The concept is part of NAB’s ongoing mission to grow footy and give back to those at the heart of the game – fans.

A Fanshake is a cast iron agreement between rival AFL fans to get out and do something positive for the football community. Throughout the season, fans will find a rival, set a footy-based pledge and then make good on it if their team doesn’t get over the line.

The pledges fans will make are sure to be varied (some humorous, some heartfelt) but all will be designed to grow, contribute or give back to the football community in some way. Whether it’s polishing the boots of every NAB AFL Auskicker in the suburb or painting the rooms at the local footy club, fans can call on friends, mates and colleagues alike. It’s a chance to do something good for the game by making someone else do something good for the game.

Kevin Ramsdale, GM brand and products marketing at NAB, said this year’s campaign builds on the enthusiasm, camaraderie and rivalry within local football communities right around the country.

“We are essentially harnessing the positive approach to competition between rival fans and encouraging them to give back to the footy community, whilst having some fun along the way,” Ramsdale said.

“We’ve been supporting the AFL for over a decade and this campaign is another way that we can keep delivering on our commitment to not just sponsor the game but to grow it and give back to it,” he continued.

Clemenger BBDO Melbourne creative director Rohan Lancaster says sharing a Fanshake through social media means that fans have an obligation to live up to their promise.

“The AFL is a unique football code - fans can have the fiercest rivalries during the game, but afterwards, they’re willing to shake hands and have a laugh. We used this insight to base the idea around the classic fan behaviour of backing one’s team with absolute faith.

“A Fanshake ensures that after the match, one Fanshaker will have to do something that enhances or gives back to the game in some way,” he said.

As a longstanding partner of the AFL, NAB has been committed to growing the sport of AFL at all levels for many years. Fanshake is the third instalment of their annual Footify campaign, following the launch of FootifyFM in 2013 and more recently, Fansplant during 2014.

To get involved and set a #fanshake with a mate, visit nab.com.au/afl.